In York County, we are tough and rough on our landmarks: Linked in with neat York County history stuff, April 27, 2012 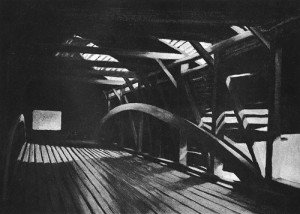 The Gazette and Daily’s July 1968 calendar entry explains this scene: ‘This interior view showing the elaborate framing of the old Detter’s Mill bridge over the Big Conewago near Harmony Grove won first place in a Keystone Roofing Company contest several years ago. The bridge – 125 years old and at 258 feet one of the longest left in the state – mysteriously collapsed and then burned during a drive to raise funds to restore it. The artist was Kenneth J. Thompson.’ (Love that, a roofing company sponsoring a contest!) All this makes one wonder how a bridge can collapse on its own and then catch on fire. In York County, we’re tough on our landmarks. Covered bridges had roofs to protect the timber from the elements. If anyone knows about this incident, please comment below. The G & D annual calendar featured bridges that year. (For another photograph from that calendar see below, as well as a beautiful color photo of the Detter’s Mill bridge. Click to enlarge this photo.) Also of interest: What stood for 142 years came down in hours.

Interesting post over at the York County Heritage Trust’s blog, yorkcountyheritagetrust , about the prospect of American Pickers coming to York County.

Some folks, led by this blog and the York Daily Record/Sunday News, campaigned for them to pick for antiques in York County in an upcoming visit. Mike and Frank, the History Channel show’s hosts, among other things, teach history as they pick treasures from neglected collections. Seems like a good way to highlight York County’s history before a national audience.

Our next congressman? – This YDR/YSN editorial – How did Scott Perry do it? – seeks to explain how Scott Perry scored such success v. his competitors in Tuesday’s GOP primary to select the party’s pick to replace Todd Platts.

Top funder: A museum at Lutheran Theological Seminary in Gettysburg receives a $1 million gift in honor of historian (and one of my favorite persons) Charles H. Glatfelter.

Best of yorkblog.com: Check out the good stuff on Buffy’s World – Cookbook giveaway to Mother’s Day and recipe contests to tombstones and YAIAA spring sports.

Want to know more? Find out about these topics at Joan Concilio’s Only in York County blog: 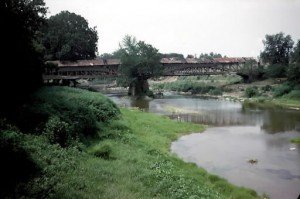 The stately Detter’s Mill Bridge before it collapsed and caught fire.  Submitted by a reader. 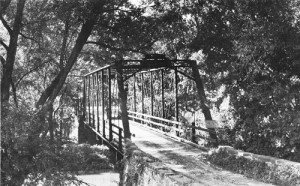 Old Forge Bridge, north of the Detter’s Mill Bridge over the Yellow Breeches, was the successor to the covered bridges that crossed York County streams for years. The bridge, constructed in 1889, linked York and Cumberland counties. It was featured on the May 1968 G & D calendar page. Photo from York County bridge files.