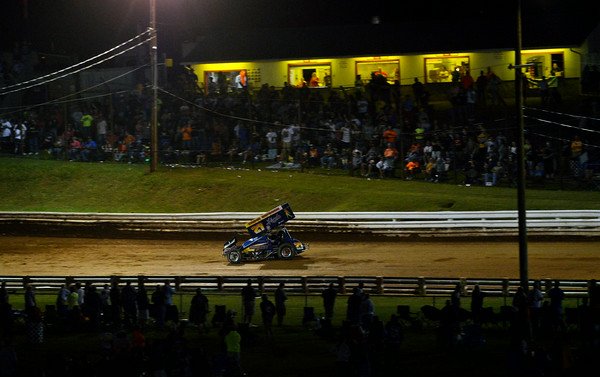 Spring Grove’s Greg Hodnett is seen in the Dash race this weekend at Williams Grove Speedway. The weekend brought together The World of Outlaws and the Pennsylvania Posse at the speedway, celebrating its 75th anniversary in 2014. The YDR’s Chris Dunn captured this classic American scene, suitable for Norman Rockwell, a speeding car, dirt track and attentive audience. Also of interest: All Wheels of York stories and photos from the start.
+++

York County’s love affair with its all things on two or four wheels extends right across the York/Cumberland line into Williams Grove. On race nights, York countians migrate toward the northwest.

So to observe the 75th anniversary of the track, here are 6 scenes that touch on The Grove, as its fans call the one-half mile clay oval where sprint car racing reigns:

1. Actually, the migration to the northwest has been going on since, maybe 1751. That year, legal work began to create a road connecting the York/Cumberland county seats. That road, is roughly Route 74 today, running not far from Williams Grove. Today, in the York area, that highway is known as the Carlisle Road. And, in the Carlisle area, the York Road.

2. Williams Grove – or rather the railroad that spawned it – could be observing a 175th anniversary of sorts. The Cumberland Valley Railroad went in between 1837 and 1839 and connected Harrisburg to Chambersburg with stops in Carlisle and Shippensburg in between, one history states. In 1872, a branch that would include William Grove opened. The Grove was a railroad park, providing grounds for what was then called a railroad picnic. Williams Grove and its attractions drew riders to that branch on weekends and other off peak times. (York County hosted one of those picnic parks, too: Springwood Park.)

+++
3. OK, enough history, how about that 1939-vintage William Grove oval? Here’s a scene getting ready for this weekend races:

+++
4. And a York Daily Record story on that racing evening: Hodnett passes Saldana in summer nationals win at Williams Grove. And here’s the report from the Saturday feature: Lance Dewease wins at Williams Grove as Pennsylvania Posse sweeps World of Outlaws.

5. And YDR Media Center photo gallery from the first night of racing.

6. Maybe the best for last. The YDR’s Brad Jennings shows he’s good a figuring things out, as are track officials. From Brad: “Time trials. Heat races. The B-Main. The Dash. Inversions and transfers. Provisional starters. Just how does the World of Outlaws sprint-car series determine the starting lineup for its feature races at area tracks such as Lincoln Speedway and Williams Grove Speedway? This video breaks down the complex process.”
+++

1. York County has it’s own tracks today, but here’s a glimpse of one dirt track that came and went: Bowling Green Speedway

2. This was York County Saturday night racing of a different sort – drag racing. It operated for years before shutting down in 1979: U.S. 30 Drag-O-Way.