In time of war in New York, N.Y., to York, Pa., the Salvation Army stands on the front lines 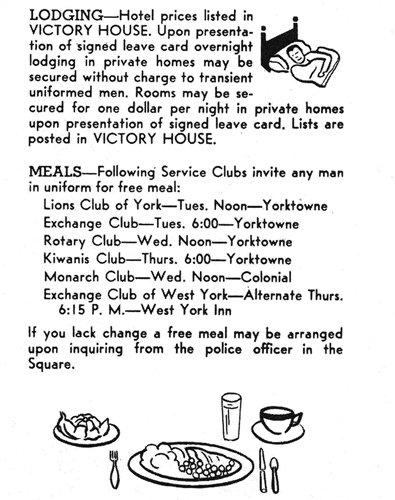 This drawing from a York, Pa., USO brochure provided instructions to World War II servicemen stopping over in York. As I wrote in “In the Thick of the Fight:” “Victory House listed in this information was the Colonial Courthouse replica, then in use as headquarters for war bond and stamp drives in York’s Continental Square. This information suggests the ongoing presence of a policeman in York’s center to keep the peace, answer servicemen’s questions and provide vouchers for free meals and lodging for chronically cash-poor military men.” A Salvation Army canteen joined the the officer and Victory House on the square. Also of interest:  JFK contributed to York’s Salvation Army’s building.

Major James B. Cocker recalled mobilizing local workers for  relief work in the aftermath of 911 at the World Trade Center site in New York.

He was in York’s Continental Square for the community gathering that mourned the loss of life on that terrible day.

Volunteers to travel to the disaster site in New York City came forward after that, he told a gathering at the Salvation Army’s annual dinner this week.

A unit from York, including York County Court Administrator Bob Chuk,  joined Maj. Cocker and his army in 12-hour shifts to provide physical and spiritual food to site cleanup workers… .

As the major was talking, I recalled reading about the Salvation Army’s presence in York in the middle of another disaster, a two-front war – World War II.

The Salvation Army ran a canteen and club car trailer on Continental Square.

Servicemen awaiting trains or staying over would migrate there.

The canteen offered doughnuts, sandwiches and coffee, and servicemen could lounge in the trailer to listen to the radio, chat with a hostess or enjoy records on an electric portable phonograph. The men also could pen letters in a writing room supplied with paper and envelopes.

Maj. Cocker noted that the Salvation Army was the first relief agency to arrive the last to leave World Trade Center site.

Sixty years before in a different war, bet the same was true about the Army’s presence on York’s Continental Square.

Voni B. Grimes was the community recipient last year.

Also:
– Lonely guys in uniform came from all over to take part in York County USO activities in World War II