In this York County mystery town, you’re either going up or down a hill

This postcard showing a bird’s eye view of … well, what York County, Pa., town? The postcard shows the town about 100 years ago, for it was postmarked 1917. That it’s the property of the Stewartstown Historical Society might suggest its somewhere in southeastern York County. It’s a little like Glen Rock in that town. You’re either going up or down a hill. Answer is below. To see a host of other postcards with York County views, see this Media Center gallery. Also of interest: This post anwers this question: What is a deltiologist?

Catching up, with neat stuff from all over … .

Haviland Road in West Manchester Township has been in the news, scene of a skeleton found near its intersection with Loucks Road.

So how did this stretch of the old Carlisle Road get its name?

It came from the residence along there of light fiction writer Katharine Haviland-Taylor, as this post about West Manchester’s authoritative history book indicates.

Our pop artist: Jeff Koons, a York native son whose artistic work has been compared to Andy Warhol’s, was in the news recently. His “Balloon Dog Orange” sold for $58.4 million. That is not a typo.

This is just interesting: It’s a story about a repository in Butler County in western Pennsylvania for priceless national treasures. 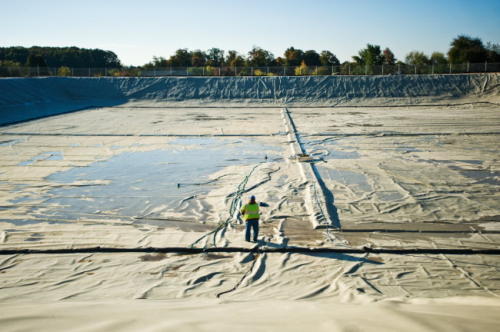 For some reason, drained lakes and reservoirs make fascinating photos. This is the Parr’s Hill Reservoir, source of Hanover-area water. Sheets that separated the reservoirs from the birds and other flying objects are worn, so some mending is under way. Remember when the two reservoirs on Reservoir Hill in York were uncovered? The hard covers over those ponds went up about the same time as Parr’s, in the early 1990s.

*The postcard view shows the borough of Felton, named after a railroad man working with the Maryland and Pennsylvania Railroad. The Ma & Pa put Felton on the map, as told in this all-about-Felton post.