In this day of mergers, Hanover plans opening of not 1, but 2 museums: Linked in with neat York County history stuff, March 20, 2012 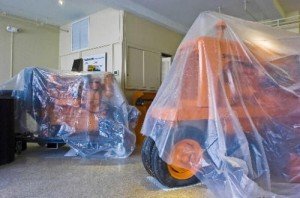 The other day, Hanover unveiled plans for an expanded and relocated fire museum. Now comes 75th-anniversary plans by R.H. Sheppard Co. to develop a museum on the 500 block of Broadway in Hanover. The Hanover Evening Sun reports that the 4,000-square-foot museum’s exhibits will range from early tractor engines to its manufacture of heavy-duty power-steering gears and systems. Here, antique tractors to be placed on display were among those built from 1949 to 1956. These developments are interesting. At a time when museums on consolidating, Hanover is opening new halls. The question always is whether the enthusiasm and vision and dollars of museum founders  persist as the years pass. (Click on photograph to enlarge.) Meanwhile, York County should consider a marketing campaign around the concept: Land of Museums. Check out this list of such sites. Also of interest: Furniture and motorcycles, York County icons, come together in this Hanover factory-warehouse.

Anyway, now we have Lancaster Long Rifles coming in the form of an exhibit at Landis Valley Village and Farm Museum.

The exhibit is titled “The Golden Age of an American Art Form:  the Lancaster Long Rifle.”

This is an image of the Frederick George Fainot rifle from around 1770. The image can be attributed to the book, “The Lancaster Long Rifle,” written by Patrick Hornberger and John Kolar, the guest curators of an exhibit on the rifles at the Landis Valley museum.

“York and Lancaster Counties have some things in common:  not only do we share a river, but an affinity for making chocolate, snack foods, and Pennsylvania Long Rifles,” an email from the museum stated.

They made such guns in York County, of course.

Blog post of the day, I: The York Civil War Roundtable is changing its venue this month. But the program is the same: The Battle of Pea Ridge, as Cannonball’s Scott Mingus points out about Wednesday, March 21’s event.

Blog post of the day, II:  Yorkblogger June Lloyd is continuing the pursuit of the whereabouts of Declaration of Independence signer James Smith’s original gravestone. The one in the First Presbyterian Cemetery is marker No. 2. Considering June’s tenacity as a researcher, she’ll find it.

Forum of the day: Exchangers are discussing those vultures that are invading Glen Rock. Vultures? Here’s the story for background.