In this Christmas season of miracles, a miraculous York County story

Christians believe Christmas is the story of a miracle.

They believe God sent his son, Jesus, into the world – an infant born in a remote stable, God made flesh. 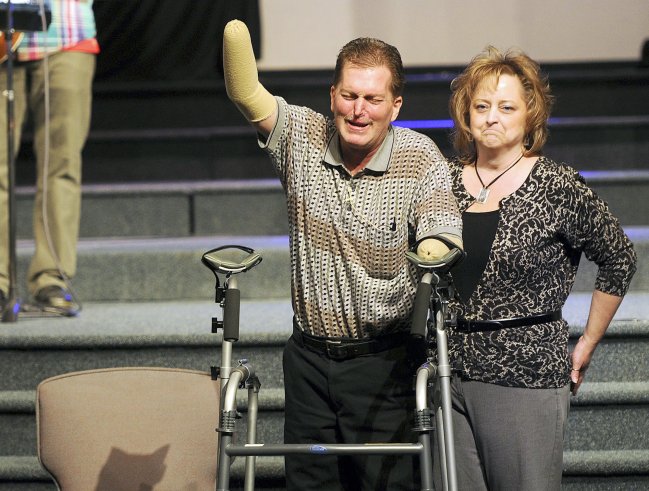 Paul Miller first felt the impact of Streptococcus Pneumoniae on Feb 3. Doctors gave him a 5 percent chance for survival as they placed him into a coma. They had not seen a patient as sick as Paul live through such an illness. His wife, Shelly, offered hope: ‘We’re just going to pray for a miracle.’ He survived. The illness took his feet and hands. Here, Paul Miller and Shelly are greeted by the congregation at Manchester Township’s Stillmeadow Church of the Nazarene two months after he first went to the hospital.

“He said, ‘Church of Jesus Christ, I present you Paul Miller, alive and well.”  – Paul Miller quoting his pastor, the Rev. Bud Reedy.

WellSpan’s Jenny Reimold, right, and Alicia Fry work with Paul in his recovery.

‘I could have been very angry at God and the world and everybody. You run those things out of your mind pretty quick.’ – Paul Miller

Paul kisses his grandson, Wilder, in a welcome home party in April.

‘This is a feel-good story because there’s a 5 percent survival rate … I beat those odds, with God’s help.’  – Paul Miller 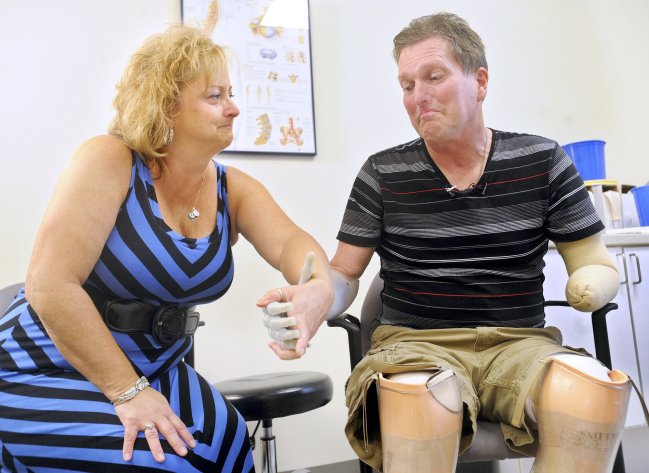 Outfitted with myoelectric prosthesis in August, Paul was able to hold hands with Shelly.

‘There are God-fearing Christian people who don’t believe God performs miracles anymore. Well, I got one thing to say to that, Paul Miller Sr.’ –  Bud Reedy

This was based on a York Daily Record/Sunday News story by Brandie Kessler, with photos and video by Jason Plotkin. To read the story, “When doctors took his hands and feet, York County man held tight to faith,” see: ydr.com.