In the hunt for Shultz’s one-room school: Linked in with neat York County history stuff, Aug. 7, 2012 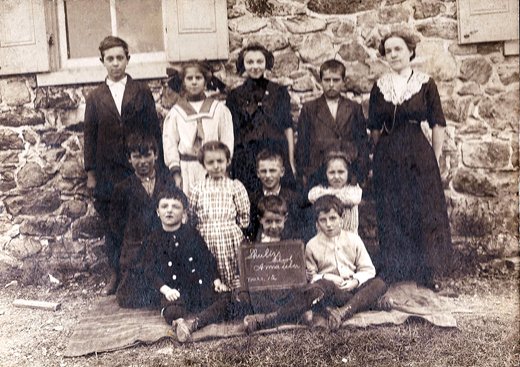 Emailer Phil Olphin is looking for for the whereabouts of Shultz’s School. ‘My great uncle, CJ Smith who grew up in Glen Rock, gave the attached photo of “Shultz’s School, Anna Leber, Nov 22, [19]12” to me recently,’ he wrote. “With all that info, I thought it would probably be easy to uncover the school’s location and hopefully identify some of the students.  That hasn’t proven to be the case.  Instead, the only available information appears to be that Ms. Leber may have later married George R. Donley and that she died in Elizabethtown RD 3 in 1950 at the age of 68.  However, I don’t have any proof that the Anna Leber who married Mr. Donley is the same Anna Leber the teacher, but her age “fits” with the photograph. CJ’s wife, the former Mary Elizabeth Fellabaum, who recently passed, was from the East Prospect area, so there is some possibility the photo came through her family and the school could be in that region.  Perhaps one of the boys is Mary Elizabeth’s father Edward, who would have been 9 years old in 1912, or her mother Agnes Poff, but she would have only been 4 years old when the photo was taken.” Any information about the Schultz School or Anna Leber? Comment below or contact Phil: One-room schools clearly continue to fascinate area folks, and with good reason. They’re an interesting piece of our past. Also of interest: One-room school teachers of yore given limited time to court .

“In my column this week, I mention there is a statue of Edgar Fahs Smith on the University of Pennsylvania campus. On page 1 today there was a photo of Chris Doleman hugging the bust of himself that is in the Football Hall of Fame. ”

“The question is: How many statues of Yorkers – past and present – are there around the country?”

“Could be interesting to determine where statues of Yorkers are located.”

From the archives: Starbucks. Thinking the other day about how few people know the plant in York County roasted the beans for that cup of Joe. Then YDR ran a story today about a former tester there who now has her own roasting plant. I don’t think there was mental telepathy at play here. Check out: Starbucks, roasting for millions of taste buds, tucked into corner of York County.

Forum of the day: Another section of rail trail has opened in Jackson Township: Are you a rail trail user? How do you use the various rail trails and other county parks around York County. Pleased comment below: Local and state parks: York County’s best idea?