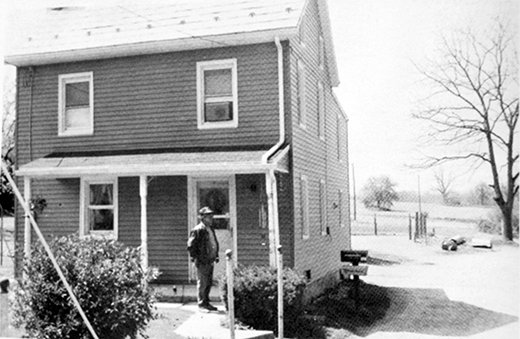 Potato Town, York County, Pennsylvania? This structure, an old school house, was all that was left of the gathering of about a half dozen houses in North Codorus Township when Armand Glatfelter was writing his history of that township. Is it still standing? Let Ron Dise and I know. (Update: Check out this ‘after’ photograph to show Potato Town today. Also see the comments below for more information on Potato Town, including how to get there.) Also of interest: Chipmaking of the potato kinds has deep roots in York County.

The recent Codorus Valley Chronicles carried a reprint from an Armand Glatfelter piece about Potato Town, a settlement of workers houses.

Glatfelter writes in “The Flowering of the Codorus Palatinate” that the extended family of settler Peter Lau operated a potato farm on the south side of the Codorus Creek in the township for decades. He said the houses for those working in the potato patches stood along Martin Road.

The houses included a structure housing a Sunday School and then later a schoolhouse. The construction of Indian Rock Dam in 1942 took the houses, but the schoolhouse remained standing.

Enter tireless student of history Ronald Dise, who is a leader of the Codorus Valley Historical Society and the history community in southern York County.

I asked him whether the old schoolhouse, described by Glatfelter in 1988 as the last remaining log school building in the township, still stands.

Here’s part of our exchange:

Me: Ron, really appreciate getting these (newsletters). Very interesting. Hey, could you help me locate Potatotown? You mention a school is still standing there. Can you give me roads that run nearby or landmarks? I know that you mention some houses are no longer there but the school is. Just trying to place where it was. Thanks. And keep up the good work.

Ron: I called the North Codorus Township office and asked them if they could direct me to this building in the Indian Rock Dam area. They never heard of it. So my wife and I drove around the Indian Rock Dam, trying to locate the house that was pictured in the book, I wanted to take an up to date photo. (He explained that he could not locate the home and does not know if it’s still standing. It might be back a private lane.)

Me: Thanks, Ron. Maybe I’ll just ask on my blog if people know where Potato town was. Thanks for checking!

If you can locate the former site of this hamlet or the site of the old school, comment below.