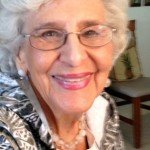 Ann Small Niess, resident of the Elmwood Mansion from 1923-1947, writes about the intriguing East York structure in a book released this week. The mansion now serves as a conference center for Memorial Hospital.

The Elmwood House has long been one of York’s most interesting mansions.
It is reported to have an Underground Railroad past. Gray soldiers camped on its grounds during the Confederate occupation of York. Happenings there have spawned ghost stories.
It was long the home of one of York’s most prominent families — the Smalls.
Now, longtime resident there, Ann Small Niess, has authored a 146-page book detailing the house from the inside out: “Elmwood House, If it Could Speak, What Stories Would It Tell.” It’s available at Memorial Hospital’s gift shop. (Editor’s note, 12/4/14: The book is now out of print).
Ann Small Niess is still looking to plug a hole in the book. When was the house moved from its original location in the vicinity of present-day Memorial Hospital to where it sits today near Interstate 83? It was moved intact on greased logs in the early 1900s, and set on a pre-excavated basement.
I’ll blog further on the book, but wanted to get its availability out as soon as possible.
Meanwhile, here’s insight about how to move a house: …

“The actual physical ‘house moving’ was done by mule-team power, not by motorized equipment. These animals literally dragged the house, by their sheer strength, down a slight hill and onto its new location. After the house had been pulled free from its original foundation, it was jacked up and positioned onto a wooden sled that had been mounted onto a bed of rosined logs. The coated logs were constantly rotated forward, making a roadway for the sled to drag the house from the old location to its newly constructed foundation, two city blocks away.
“The newspapers of the time stated, ‘that the noise made by the mule’s constant braying, as they strained to do the work, could be heard some distance away.’ “

For additional information on the mansion, see previous posts: mules and dinner conversation.