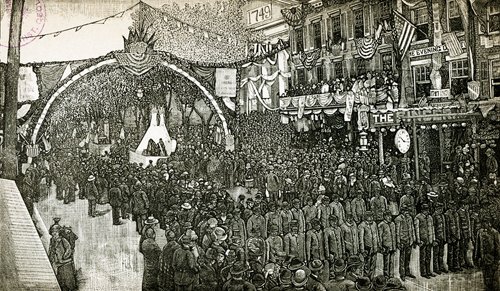 In 1887 – the centennial celebration marking its incorporation as a borough in 1787 – the city marked the occasion in a big way. It celebrated on Sept. 23 and Sept. 24 with parades and speeches and issued a book recounting the celebration… .

“It happened very fortunately, I think, that the centennial of the organization of York as a borough was also the first year of York as a city,” historian and Judge John Gibson said in a speech documented in the book “York’s Centenary Memorial.” ” It was fifty years of age before it became a borough, and it was a hundred years when it was made a city, and has grown steadily.”

I picked up the book at the York County Heritage Trust’s Book Blast. That particular copy book sale had originally been in the collection of the Wyoming Historical and Geological Society in Wilkes-Barre.

It brought interesting insights into York County in the early stages of the Industrial Revolution.

For example, the unnamed author painted a pastoral scene about the farming community of York in the 1700s:

“The quaint aspect of York in its infancy with its comfortable low houses of stone, logs, or alternate red and black brick, built directly on the narrow pavements, with small windows and high stoops, with broad benches on either side, on which the haus frau sat with her knittting, and the placid German smoked his pipe, exchanged his “guten morgen,” or chatted with is cronies, formed a picture of Arcadian simplicity and contentment. The sparcely built streets, interspered with wide fields of clover, wheat and corn, gave an impression of rural peace and plenty.”

York Mayor Daniel Noell, speaking at a July 30, 1887, town meeting, saw beauty in a more built-up York, a York primed to benefit from its growing manufacturing base:

“But now look at our beautiful city, with its 25,000 inhabitants. Here she sits in this magnificent dell, like an apple of gold in a picture of silver. Our sidewalks are well paved, the streets macadamized, and where desolation once stood there are rows upon rows of three, four and even six-storied houses… . What more do we want? Let us celebrate the centennial and honor our ancestry thereby as they deserve, and, as we do to them, so will our descendants do to us a hundred years hence.”

The Rev. Arthur Powell, St. John’s Episcopal Church, seem to answer the question: “What more do you want?” at that same meeting

“But I gravely fear that most of the citizens of this fair place do not rightly appreciate these things. In your ceaseless toil to win from the rich soil its golden grain, you have forgotten those higher riches for which our forefathers so heroically struggled. In your devotion to the well-being of the body you have neglected in a great degree the development of the mind, so that York, with it’s population of twice ten thousand inhabitants, has none of those institutions and associations which mark almost every hamlet of New England, such as a historical society, a public library, a lecture lyceum, a school of arts, a choral society, and a literary club… . Let us make York a Mecca to which the pilgrim feet of loyal men will love to turn and wander over the scenes made memorable by the founders and the defenders of the Republic.”

So such an event delivers a variety of views of what a community can and should be. The sharing of such diverse views can, in a strange way, create unity and propel a community ahead.

Perhaps York City officials, 125 years later, should throw a celebration that could be used to create community within this community. 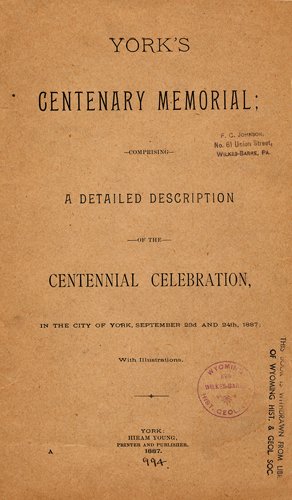 This is information from the booklet touting York’s 100th anniversary.