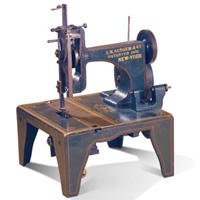 This patent of the first Singer sewing machine appeared on the Chambersburg Public Opinion website with the caption: ‘Sew’ long ago.’ The first patent for a Singer was issued in 1851 – 160 years ago. Also of interest: Early American washing machine – invented by S. Morgan Smith – tied to York County.

Singer Sewing Company has introduced a website  inviting sewing fans to share their memories of the once ubiquitous sewing machines  160th anniversary.

York countians should take particular note about all things Singer. Its founder lived in York County in the 1800s. He and his family – who made machines for quiet household use – made a controversial, public mark here. More about that in a second.

The patent of the first Singer sewing machine by Isaac Merritt Singer was issued Aug. 12, 1851. The 160th celebration will continue through August 2012, a news release states.

The sites has a tool for people to learn where and when their antique machines were manufactured. They can find their machine’s history by entering a serial number.

And now for the Singer York County connection, taken from my “Never to be Forgotten:”

Isaac Merritt Singer, the sewing machine inventor with future family connections in the county, is born in New York in 1811. Trained as a mechanic, he moves to York early in life and works as a tailor. He also teams with Charles Sponsler as an entertainer. He develops a common-law marriage with Mary Ann Sponsler, Charles’ sister, and later makes a fortune producing the innovative continuous-stitch sewing machines. The couple move to New York City but return often to the county. Mary Ann Sponsler and other women in Singer’s life angrily litigated his estate upon his death in 1875. “Later, at the height of his career, he headed concurrently three households in New York City, under three different names, while his first and legitimate family lived nearby on Long Island,” a biographer wrote. Another York woman fared little better with Isaac and Mary Ann’s son, John A. Singer. John married Addie V. Small, member of a prominent county family in the 1880s. His family lived in a large house in York’s east end. The pair made headlines in 1891 when Singer left Addie, his fourth wife, and moved to New York City. Addie preceded Singer in death, and he fought for her estate on the grounds that his cohabitation with her after their split brought the $180,000 estate back into his hands. When Singer died, C.V. Sponsler, his cousin, received 250 shares of stock in Singer Sewing Machine Company, worth up to $75,000 in 1911. Sponsler, a York Cab Company clerk, said his inheritance would remain in Singer stock — his preference over any other investment.

– Another household name – Tupperware – is observing its 65th anniversary.