Improved Order of Heptasophs of Stewartstown: Everything you ever wanted to know about this fraternal group 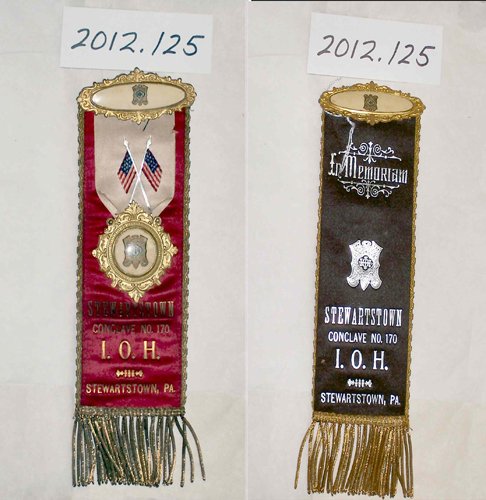 Stewartstown Historical Society’s Doug Winemiller explained a recent discovery in that southeastern York County borough: ‘We recently found a photograph of the Stewartstown Chapter of the IOH (Improved Order of Heptasophs). The literal translation of heptasophs is seven wise men. Are you familiar with this organzation?’ Also of interest: Changing Stewartstown ‘one of the most attractive boroughs.’

Doug Winemiller emailed about a recent find of interest: Artifacts from the Order of Heptasophs.

Which leads everyone to wonder what that group was or did.

Doug found that it was a splinter group of the Order of Heptasophs:

“The original Order of Heptasophs was founded in 1852 which marks it as one of the country’s earliest fraternal orders. According to Axelrod, there may have been predecessor organizations dating back as far as 1837. The name is derived from Latin roots meaning seven and wise and is generally interpreted to mean seven wise men.

“The Improved Order of Heptasophs split off from the original order in 1878. The cause of the split was a disagreement over whether the order should offer life insurance. Fraternal orders in the late 1800’s were increasingly involved in the life insurance business­ their members demanded it­ and the IOH reflected that trend. Like most fraternal life insurance societies, the IOH would gradually become less of a fraternity and more of an insurance company and would lose its fraternal identity in a series of mergers with other insurance companies beginning in 1917.

“As other fraternal benefit societies were accustomed to doing some seventy years ago, the IOH also employed the assessment plan in collecting funds for its life insurance (death benefits). During the 1890s the order’s death benefits ranged from $1,000 to $5,000. The IOH was one of the first fraternal benefit societies to place its insurance operations under state insurance departments.

“Initially, the IOH operated on three levels, but after a few years of ex­periencing a three-level structure, it disbanded the state level and retained only the “Subordinate Conclave” and the ‘Supreme Conclave.’ The society had its head office in Baltimore, Maryland. In May of 1917 the IOH ceased to exist when it merged with the Fraternal Aid Union. The latter changed to Standard Life Association in 1933.”

He was from York and died in Stewartstown.

“The Father of the Heptasophs Passes Away Suddenly. George V. Metzel, widely known as the founder of the Improved Order of Heptasophs, died this morning at his home in Stewartstown,” the article states.

“Mr. Metzel’s connection with the Heptasophs dates from the very inception of the order in 1878 and he was generally acknowledged as the founder of the order. Recently he celebrated the golden anniversary of his wedding, on which occasion the leading members of the order united in presenting him with an autograph collection of congratulatory letters handsomely bound, in addition to $100 in gold,” the article said.

Metzel, born in York, served as a Baltimore policeman and justice of the peace.

He moved to Stewartstown later in life.

The Stewartstown Historical Society is looking for other information on Metzel or the order, with the strange name, that he founded.