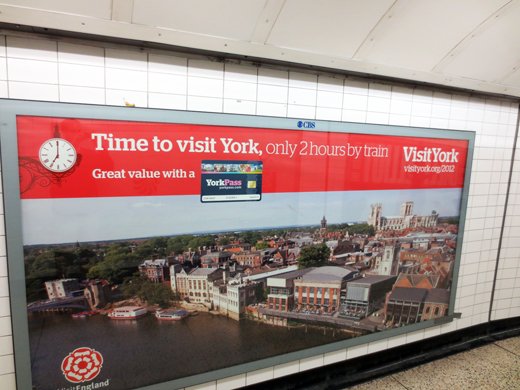 David Freireich, a former York countian, at the Olympics caught this sign of York – York, England, that is. It reminds you that, on occasion, York isn’t the center of the universe. Before settlers establish their York, Pa., address in 1741, there was York, England. That’s still the case. Another thing: By one count, there are about 30 other Yorks on the map of the United States. York, Nebraska. York, Maine. You got it. David Freireich is a public relations manager for Aramark, which is involved in food services at the Olympics. Also of interest: York vs. Lancaster, Pa: The American War of the Roses still rages

Lance Wolf, an astute observer of the York County scene, is weighing in on two disaster photographs that recently appeared on yorktownsquare.com, courtesy of the Dallastown Area Historical Society. (See: A Dallastown mystery: The case of the unidentified photographs.

He wrote the society and copied me. The email is excerpted here:

“There was a tornado that struck Dallastown. It struck the Chautauqua big tent at the corner of Maple and School place and I think some people were killed or injured. My grandmother often mentioned it. For those doubters among us, somewhere I have photos of the damage.  This tornado would have been big news in the newspapers of the time.

Lance is right about the mighty wind that blew down the tent and killed Dr. E.S. Mann in 1915. More about that in a future post. But it’s unclear that was the disaster reflected in the photograph.

Forum of the day: York countians loved to eat chicken even before the Chick-fil-A chain arrived here and enjoying chicken was not political. For those venturing to Mount Zion and Whiteford roads in Springettsbury Township, Avalong’s, pictured here in this Metro Bank mural, was known for its broasted chicken. What are your memories of Avalong’s and other local finger lickin’ good eateries? Please comment below.

Best of blogs: Yorkblogger June Lloyd writes more about the mysterious Crandall’s Health School, including the fire that took it down.

From the archives: The origin of call letters for radio and TV always interested me, and so does the various locations of local stations. Don’t know why, but I have followed WSBA etc. pretty closely on my blog. Here’s one example: Old WSBA station: ‘Another part of history has gone’

York County Heritage Trust’s Book Blast is set for next week. The annual event at the Agricultural and Industrial Museum, seen in this video from last year’s used book sale, gives you a chance to load up for fall reading.