If you’ve ever wanted to buy a Golden Swan, here’s your chance in York, Pa.

The Golden Swan building, left, is for sale. This 200-year-old fixture on the southeast corner of York, Pa.’s Continental Square is listed for $605,000. ‘In addition to its views looking over Continental Square, the nearly 9,800 square-foot building has hardwood floors and a fireplace,’ the York, Pa., Daily Record Gary Haber wrote. ‘The building, which dates back to at least the early 1800s, has been known at various times in its history as the Weiser Building or the Golden Swan Tavern.’ Many York countians remember the building as Newswangers Shoe Store. Also of interest: York, Pa.’s, snowy Continental Square from on high: How did the photographer get this picture?

When something happens in York’s Continental Square, for 265 years or so the heart of York County, it makes the news.

So when a developer sought to buy 20 feet of the square as part of the deal for the Marketway building on the square’s northwest corner, it made news.

And when Well Fargo Bank puts the landmark Golden Swan on the market, people want to know about that too.

“It’s very historic in nature and plays an important part in the landscape of Continental Square,” Natalie Williams, of Downtown Inc., told the York Daily Record.

Check out these five additional images of the Golden Swan:

Continental Square, as seen from the second-floor window of the old Golden Swan.
+++

This is pretty interesting. One of two old hotel rooms in the Golden Swan’s attic. For additional YDR photos of the Golden Swan, check out this MediaCenter gallery.

5. A popular place in its day: 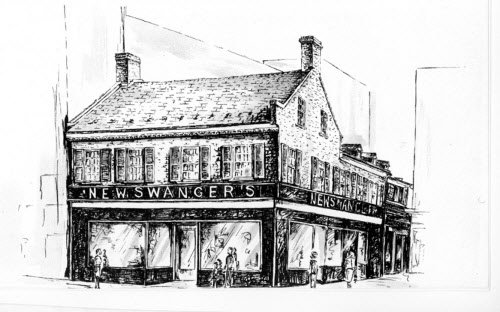 Newswanger’s shoe store was a popular stop in its day. For memories of the downtown, check out: The 1950s, 1960s: The greatest time to grow up in York, Pa.