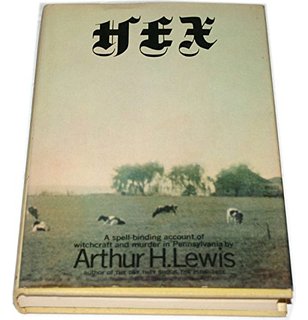 Arthur Lewis’ “Hex,” the first book on the famous York County Hex Murder of 1928 and subsequent trail is said to be out of print. But Ross McGinnis’ “Trials of Hex” are still available at York County booksellers. Both paint an intriguing picture of the practice of powwowing in York County. Background post: ‘Powwowing was done for good’

The casting of spells and witchcraft are themes behind the story of York County’s famous Hex murder of 1928.
The murder of witch Nelson Rehmeyer by three young assailants is a case where the related practice of powwowing – the use of witchcraft for healing purposes – went amok.
But how did the widespread practice of powwowing really work?
It seems like a story from the Middle Ages, but here’s how powwow doctors worked in 20th-century York County, as described by Arthur Lewis in his 1969 book “Hex”:

Except for two days a month, the Rohrbaugh Convalescent Home in rural Spring Grove (pop. 55), York County, Pennsylvania, is about as quiet a spot as you’re likely to find anywhere in the Keystone State. But on the first and sixteenth, it becomes a mecca for scores of ailing men, women and children who flock to this tiny village, there to be powwowed back to health by Mrs. Leah Frank.
Mistakenly, I assumed there was some significance in the choice of the two days on which Mrs. Frank practices her profession.
“When I reached ninety, and that was four years ago,” Mrs. Frank explained, “I thought maybe I’d better quit altogether; it’s so hard on a body. But my people wouldn’t let me, tole me they needed me. So, instead of workin’ every day, I tole ’em I’d ‘try for’ two days a month and I picked the first and the sixteenth. Then people will know when to come and not be disappointed in between. That’s all there is to it.”
Through the windows of the second-floor bedroom she seldom leaves, Mrs. Frank can view the soft hills of York County where she has lived all her years. As a matter of fact, the aged powwower spends most of her daylight hours in an old-fashioned Morris chair facing the east. “I’d rather see the sun come up than go down,” she says gently.
Except for a slight diminution in hearing and arthritis, only lately beginning to cripple the long, tapered fingers she needs for “laying on” ill or otherwise troubled patients, Mrs. Frank remains in excellent health. Her cheeks, though wrinkled, have a healthy glow; her teeth are her own, and her sharp blue eyes still regard with abiding interest that small portion of the world she sees.
“Prettiest part of the world, though I wouldn’t know much about the rest of it,” Mr. Frank said in a clear voice with a strong Pennsylvania Dutch inflection. “Born and raised ten miles from here and never been no further away than forty. But you don’t have to travel to learn things and how to take care of ’em that needs you, do you?”
She smiled and went on.
“I’ve been tryin’ for people for a long, long time. I always know’d I had the power but I learned how to use it from a veterinarian who practiced powwowin’ too. That was back in 1904; I’ve been doin’ it ever since.
“Course that’s not all I ever done. I just used to try for people on the side like most of us faith healers do. From the time I was a little girl ’till I was seventy-seven years I worked in a mill and I worked hard, too. Anymore I don’t work so hard. Now I’m so old I oney powwow.”
What troubles Mrs. Frank is the current shortage of apprentices willing to undergo the rigors of training in order to become worthy practitioners.
“I don’t mean those that don’t have the power inside ’em ’cause they’ll never learn no matter how much they want to. Some of ’em try but I always say to ’em, ‘If you can’t stop blood, you’ll never be a powwower, so don’t waste your time.'”
“What I’m referrin’ to is those that got the power but don’t want to use it. It ain’t easy; you have to work hard and it makes you mighty tired to try for people.
Mrs. Frank did not elaborate upon the curriculum required before the neophyte can become a full-fledged practitioner. She did say, however, that after “blood stopping,” which, incidentally, she claims can never be taught and must be known congenitally, the next training step is wart removal. After that come the many other branches of the discipline concluding with cures for the opnema, St. Anthony’s fire and finally tumors.
Mrs. Frank also holds to the orthodox belief, one shared by the majority of her colleagues, that an instructor in powwowism or witchcraft may impart his knowledge only to members of the opposite sex.
“A man shouldn’t teach another man or boy and a woman can’t teach another woman or girl,” claims this nonagenarian necromancer. “I’m helpin’ train a young man who lives ’round here and he’s doin’ all right. But I sure wish I could teach my granddaughter. She was born with the power but she don’t know how to use it. She could do wonderful good.”
I asked Mrs. Frank what would happen if she attempted to teach the profession to her granddaughter. She shuddered.
“Oh, my goodness! That would be terrible. I’d suffer for it the rest of my days and maybe lose my own power if I tried.”
Like the Willow Street powwower, to whom she is not related, Mrs. Frank is aware of the present of evil area witches. However, she does not subscribe to Clair Frank’s depressing theory that practitioners of the black art are getting smarter as well as increasingly numerous.
“Not many of ’em ’round as there used to be,” Mrs. Frank said cheerfully. “And they’re getting dumber and dumber all the time. But when I was a girl!”