Brown’s Orchards and Farm Market of Loganville: ‘I didn’t know a peach tree from an apple tree, but we learned quickly.’ 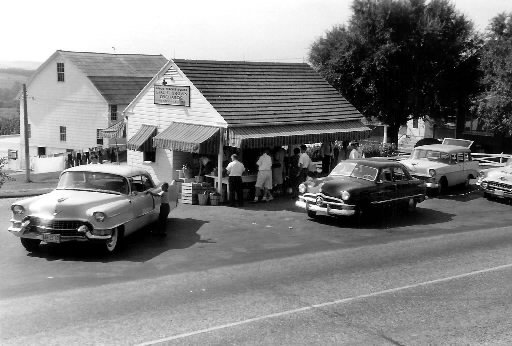 Many Susquehanna Trail motorists traveling through Loganville see Brown’s Orchards & Farm Market atop the hill and can’t wait to turn into its lot.

They might not know that the market started like so many other tiny roadside markets that dot York County’s countryside… .

But even positioned on the high hill, Brown’s multi-generational leadership caught the right wave years ago and has deftly stayed aboard. In fact, the market has caught successive crests.
That wave action was created by a growing sense that the surrounding region down into Maryland is losing its sense of community, a sense of living in simpler times or in the quiet countryside. As development has encroached and communities filled with commuters are losing their connectedness, people are looking to re-create the region’s rich agrarian past.
The popularity of antiquing is an indicator of this. So are the prevalence of Cracker Barrels (the first in Pennsylvania was erected in York County) and other such family-style restaurants.
It’s no coincidence that Brown’s gained impetus as more than a roadside stand in the 1980s, the moment that more than 50 percent of York County’s land became used for purposes other than agriculture.
Owner Stan Brown helps knit a sense of community with his own local involvement, his visibility in the store and his own instincts about those pieces of the past that his customers are seeking. For example, an expansion in 2000 included construction of the “Orchard Retreat,” reminding customers of the old Sunday-afternoon church picnic, complete with country music, hot dogs and ice cream. And it’s the venerable Hershey’s ice cream, as opposed to designer brands.
I have been fascinated with Brown’s for years. The market has sold my books and two of my kids have worked there during school.
An academic study of why Brown’s grew into a market and other roadside stands have remained, well, roadside stands would be interesting. But somewhere in the equation is the belief York County is losing its sense of place and community so important to its past. And a visit to Brown’s somehow helps restore that sense of loss.

Stan Brown was only 13 years old when he rode the bus from York to Loganville to learn the basics of growing fruit.
He learned to pick peaches, thin apples, prune trees and grade fruit, and he learned to love growing things.
His farm market has grown, too. In the past six decades, Brown’s Orchards and Farm Market has gone from a small roadside fruit stand to a farm market featuring fresh fruits and vegetables, a bakery and deli, chocolate, fresh flowers, a greenhouse, gift baskets and a coffee bar. The orchard turns 60 this month.
The seeds are planted
The family venture began in 1948, when the closing of York Safe and Lock Company left Earl Brown without a job.
Earl and Margaret Brown bought a 35-acre fruit and poultry farm. They and their three sons moved from York to Loganville.
“It was a gamble,” Stan Brown recalled. “Dad was in his early forties at the time and knew nothing about fruit growing, and I didn’t know a peach tree from an apple tree, but we learned quickly.”
They went to fruit growers meetings and learned things such as how to prune the trees. And they went to classes at the cooperative extension.
Eventually they showed their fruit at the York Fair. They took 150 to 200 plates of fruit — peaches, apples, pears and plums — five pieces to a plate. The exposure was good, Brown said, and they sold a lot of fruit to fair-goers.
“Labor Day weekend was always a big time for peaches. People came and filled the trunks of their cars with half bushel baskets of fruit and down the road they’d go,” he said.
That was a different era. Brown estimates that at one time there were 25 fruit stands along the Susquehanna Trail between Violet Hill and Loganville. Now there are two.
Still growing
Brown’s Orchard prospered in part, Brown said, because his children helped out. He and his wife, Nona, encouraged sons Scott, Richard and David and daughter Linda to make their own career choices.
David Brown recently returned to the family business and is behind Brown’s on-line ordering and the Brown Bean Café.
He liked the idea that his friends also found work in the orchards, although they teased him about being the owner’s son and getting all the easy jobs. David Brown recalled that his mother baked apple dumplings and that his sister made cherry pudding to sell at the stand.
Scott Brown, after trying his hand as a printer, returned to the orchards and stayed.
“He said he did not like being surrounded by four walls and missed the orchards,” Stan Brown said. “I am so happy he tried something else and so pleased that he came back. For 25 years, we worked side by side every day of the week.”
Scott operated the orchard, and Stan focused on retail sales. He encouraged his parents to follow their dream of enlarging the market. And Scott, who died in 2005, planted every tree that is in production, Stan said.
“Dad loved to grow, Scott loved to grow, and I love to grow,” Stan Brown said.

NEXT UP
The Brown family continues to work on the market.
They expanded it to 2,500 square feet in 1986, then to 29,000 square feet in 2000.
More changes are in the works, including an expanded parking lot, improvements to the checkout system that will include instant credit card response, and gift cards in place of gift certificates.
APPLE DEAL
Brown’s Orchards and Farm Market has been celebrating 60 years of business by selling apples at old-fashioned prices of 60 cents a pound during the month of February.
Brown’s harvested a record setting 41,000 bushels of apples in 2007, its largest crop to date. The apples are kept in cold storage and hand sorted every day to assure quality. Apples that don’t meet that standard are also available in the sorting room and will be reduced in price through Feb. 29.
Brown’s Orchards and Farm Market is at 8892 Susquehanna Trail South in Springfield Township. More information is available by calling 428-2036 or visiting brownsorchards.com.
BY THE NUMBERS
Brown’s Orchard by the numbers:
— 150: acres of cultivation including:
9: acres of strawberries
20: acres of sweet corn
4: acres of pumpkins
38: acres of peaches
42: acres of apples
— 150 to 200: full- and part-time employees
— 45,000 to 50,000: gallons of cider produced each year
— 41,000: bushels of apples harvested in 2007 (a record number)
— 4,527: pies made during the week of Thanksgiving
— 6,595: loaves of cranberry bread for gift baskets
— 22,442: cookies made for Christmas orders, tins and trays (not including floor sales)
— 2,024: pounds of chicken salad sold in December
— 4,164: deli sandwiches sold in December 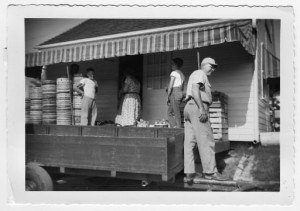 Besser’s, on the Susquehanna Trail, a favorite pitstop for motorists.