Think Irene is windy? Hurricane Hazel in 1954 moved up the coast ‘like a freight train’ 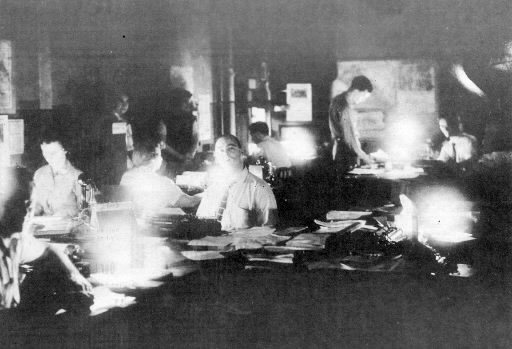 The Gazette and Daily staff works by candlelight at the newspaper’s 31 W. King St. office in 1954. Hurricane Hazel caused the power outage. The staff has battled other such adversity since. Other bad weather posts here.

Some people today, with Hurricane Irene on their minds, remember the threat of Isabella in 2003.

They recall Tropical Storm Agnes’ 15 inches-plus of rain in 1972.

Many people still remember another major storm in the past 60 years – Hurricane Hazel in 1954.

Residents in York County received warning that  Hazel might hit the area in the morning edition of “The Gazette and Daily” on Oct. 15, 1954.

“County In Path of Season’s Most Severe  Hurricane,” the headline read. “ Hurricane Hazel expected to sweep across York and other southeastern counties this afternoon. Winds of 50 to 55 miles per hour along with heavy rains predicted here if  hurricane does not veer from present course.”

That season had already produced two damaging  hurricane strikes before  Hazel appeared on the scene, according to Dr. Eric Gross, associate professor of history at Harding University in Searcy, Ark.

Hurricane Carol, which was a Category 2 storm, traveled across Long Island and into Connecticut on Aug. 21, Gross said. It killed about 60 people across New England and caused about $500 million in damages.

Several weeks later, in early September,  Hurricane Edna tracked to the northeast off the shores of the Carolinas and clipped Cape Cod on Sept. 10 and 11 as a Category 3 storm. It brought heavy rains and battered the surf along the entire mid-Atlantic and New England coast before finally moving into Maine as a Category 2 storm. Twenty-two people lost their lives to Edna.

“ Hurricane Hazel, however, would eclipse both of these storms in power, damage and death,” he wrote. “Over her erratic, 12-day life, she would frustrate forecasters, spring unwanted surprises and kill hundreds of people in three nations.”

Hazel formed as a tropical depression near the Windward Islands the first week of October and moved in a general westward direction, according to the National  Hurricane Center’s Web site.

It was somewhat late in the season for a  hurricane, Gross said. Forecasters believed that  Hazel would continue into Central America, as had other storms that developed in that area late in fall.

Hazel turned north when she encountered an upper level system in the Caribbean, according to the  hurricane center’s Web site. She crossed Haiti on Oct. 12, killing nearly 500.

The storm made it to the Bahamas on Oct. 13 just as the upper air pattern over North America was quickly changing. A deep trough pulled  Hazel north-northwestward at an accelerated pace on Oct. 14, the Web site states.

She aimed for the Carolina coast and roared ashore at the North-South Carolina border the morning of Oct. 15 as a Category 4  hurricane.

The East Coast would not see a storm of that intensity again until  Hurricane Hugo struck in 1989, according to the Web site.

In comparison to  Hurricane Ivan, which came ashore on the Florida panhandle last month,  Hazel was slightly stronger, Gross said.

Instead of weakening as it moved over land,  Hazel continued to move up the coast like a freight train, Gross said. Caught between two weather systems, she continued to accelerate until the system was heading north at nearly 60 mph.

Hazel still holds the record for the highest wind gusts in the region.

Washington National Airport near the nation’s capital recorded wind gusts of 98 mph, according to Mark Hoekzema, chief meteorologist with WeatherBug. Similar numbers were reported elsewhere: 84 mph in Baltimore and 100 mph in Philadelphia.

The York Water Co. has a notation beside the rainfall totals for  Hazel that says “winds to 50 mph,” according to a spokesman. That would be unofficial, though, because the water company doesn’t record wind speeds.

The Harrisburg airport reported wind gusts of 69 mph, according to the National Climatic Data Center in Ashville, N.C.

Hazel, while gusty, didn’t bring a lot of rain like Tropical Storm Agnes, which flooded the area with 16.02 inches in 1972. The water company recorded less than 2 inches from  Hazel, according to a spokesman.

Hazel did, however, travel into Ontario, Canada, where she dumped 8 inches of rain in less than 24 hours, Gross said, resulting in flash flooding and destroyed bridges. More than 80 people were killed there.

Lesson learned from  Hazel, others

“ Hazel brought valuable but costly lessons to the people of her time,” Gross said.

The  hurricane emphasized the difficulty of correctly forecasting such a large, complex phenomena as a  hurricane, whose strength, course and speed can depend upon numerous variables spanning hundreds of thousands of square miles of atmosphere, Gross said.

Hazel capped off a destructive and deadly season for the mid-Atlantic and New England area, Gross said. Three more hurricanes would affect the region in 1955.

The damage from the two seasons: nearly $2 billion and more than 300 deaths.

That sparked outcries from the public for better warning systems, according to Gross.

The government, in turn, built a network of coastal radar, increased research into hurricanes, improved tracking of storms and created an office exclusively responsible for tracking, forecasting and issuing  hurricane warnings — the National  Hurricane Center in Miami, Fla., Gross said.

One lesson, though, still has not been learned despite the repeated battering along the East Coast, according to Hoekzema. That is better planning of coastal developments.

Here is a synopsis of three storms that have hit the York County region in the past 60 years, from York Daily Record/Sunday News files.

Isabel: The 2003 tropical storm dropped a couple inches of rain, downed trees and closed roads and knocked out power to at least 70 percent of the county at one point. The storm caused more than $181,000 in damage to houses. Officials surveyed homes with more than $3,000 in damage, and they suspected that some damage was not reported.

Hazel: The 1954  hurricane didn’t bring much rain to York County — less than two inches — but it did bring a lot of wind. The Harrisburg airport reported wind gusts of 69 mph. York Airport did not start recording observations until 1975.