How two Susquehanna region farmsteads could see different fates. A story of preservation in York County 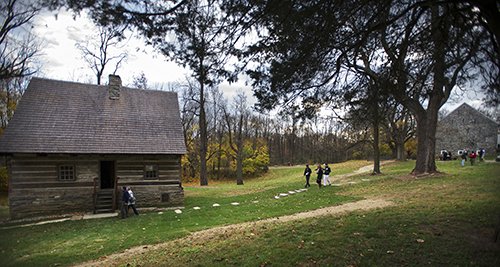 The Historic Hellam Preserve, a private restoration effort, played host to a gathering recently. A York, Pa., Daily Record/Sunday New story – ‘Hellam farmhouse a treasure trove of history’ – says the anonymous owner has spent five years improving the property from an old homestead to a preserve. ‘On Sunday, the renewal process culminated in a private opening for the owner’s family and friends, who wandered among the sprawling outbuildings, took in the history and bought prints of Rob Evans’ pieces,’ the story states. Also of interest: Why are Hallam Borough and Hellam Township spelled differently?

The other sits on public land and could only be weeks away from being flattened. The commissioners thankfully responded to a plea from historian Paul Nevin to put a hold on that Lower Windsor Township farmstead on Native Land County Park. 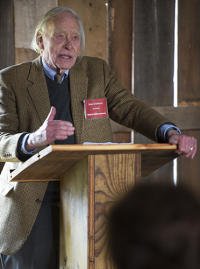 Antiquarian Joe Kindig III served as the keynote speaker for the grand opening of Historic Hellam Preserve. For other photos from that day, check out this gallery.

Several ideas emerge from all this:

The preservation movement is alive and well in that eastern region of York County. Why? The proximity of lovely land to the Susquehanna River gives property a special value. Simply put, it’s beautiful out there. Exhibit A is Lauxmont Farms. Remember that dispute?

The Susquehanna Region was the earliest settled land in the county, meaning it has old history that often gives its properties added archaeological significance.

Also, the preservationist community in the river region has the expertise and resources to make cases for conservation. They make their points calmly and professionally and support them well with research.

So York County people of power, money and access to public funds tend to listen when the cases come before them. The Horn Farm is one example of that.

Not all property can be saved. The buildings on the Lower Windsor farmstead might not survive. But before issuing permits, those with the keys to the  demolition equipment can make sure that all preservation and conservation options have been evaluated. They must be active listeners.

Paul Nevin’s ideas for “creative preservation” of the Native Land farmstead, which has close ties to the York County’s noted Bonham family, should be considered. (See below.)

And on some projects, you just never know when a white knight will step forward. The Hellam Preserve is just one example of both. 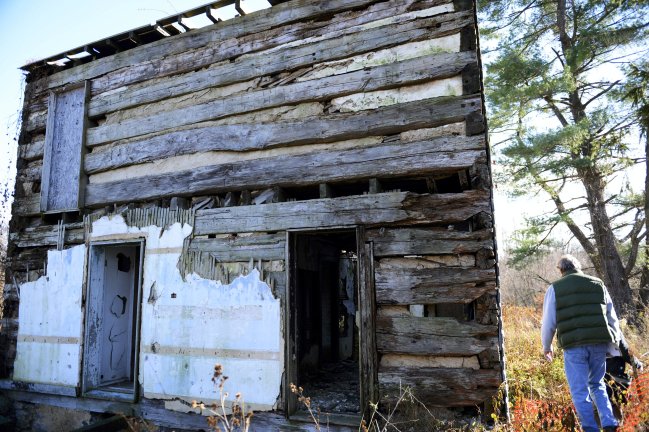 The York County Commissioners have put a 30-day hold on demolition of this Lower Windsor farmstead.

Also:
After the YDR story was published, Paul Nevin emailed me the following:

“The project to conserve the farmhouse ruins would certainly fit into the category of ‘creative preservation’. It’s my hope that the unsafe elements be removed, as well as elements that contribute to a more rapid deterioration (plaster walls, chinking between logs) to the point where we’d be left with the foundation, fireplace, and clapboard covered log skeleton of the structure. This would be stabilized as necessary to ensure public safety, and hopefully this work could be done with skilled volunteer labor. It’s an outside-the-box way to preserve and present this artifact of the park’s agricultural history – elements of ghost town, ruin, or ghost structure unlike anything in our vicinity.

“A master plan is in development for the park. A quote used in it summarizes this way of looking at what this project would be addressing:

” ‘We are inclined in America to think that the value of monuments is simply to remind us of origins. They are much more valuable as reminders of long-range, collective purpose, of goals and objectives and principles. As such even the least slightly of monuments gives a landscape beauty and dignity and keeps the collective memory alive.”  J.B. Jackson, Concluding with Landscapes (1984).'” 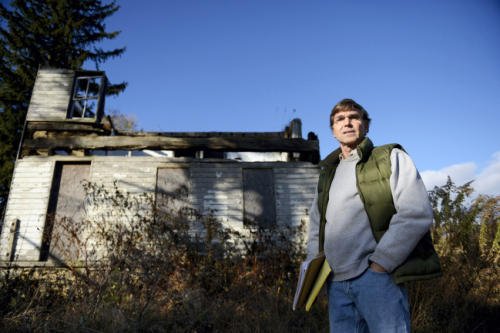