Advice from this York countian: How to accurately restore a historic home 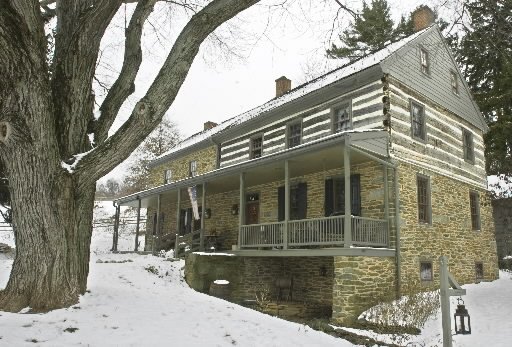 Linda and Michael Hanson restored their 200-year-old stone-and-log Springfield Township home. The age of the house attracted the family to buy the house 20 years ago. (See interior view below.) Background posts from: What was famed architect John Dempwolf’s own house like? and Two ornate mansions that Hanover Shoe built.

Old farmhouses dot York County’s countryside, making one wonder what it takes to restore on of those old structures.
And what does it take keep them going once they’re restored? 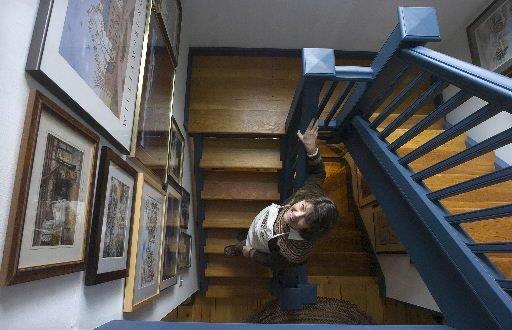 Linda Hanson stands in the rear staircase of her home.
The following article, titled “Hard work to maintain history,” appeared in the February 2008 “Spaces” magazine, published by the York Daily Record/Sunday News:

At first sight, Linda Hanson’s mother was not impressed with her
daughter’s more than 200-year-old historic home in Springfield Township.
“What a dump,” she said as the two women drove past the 23-acre
property on Seaks Run Road. “It’s crooked.”
Regardless of her mother’s opinion, Linda and Michael Hanson bought
the property, minus a working bathroom, in 1989 and have spent nearly
20 years and $500,000 restoring it.
“We moved in February 1990 and have been working on it ever since,”
Linda Hanson said. “It’s a money pit. But, it’s a labor of love.”
Before buying the home, Linda Hanson had spent years reading
magazines about ambitious homeowners who restored older homes.
“I wanted one,” she said.
In 1989, a real estate agent took Linda Hanson on a tour of York
County’s available historic properties, “but none of them tripped my
trigger.”
After three months of searching, the agent told Hanson that he knew
of one other property, but the house was old, run-down and not worth
much.
“I came out here, I saw it and I was very excited,” she said. “I
knew this was it. I had to have it.”
However, the home’s current owners didn’t share the agent’s opinion
that the property held little value.
“We made four offers on the house and eventually got it,” Linda
Hanson said. “As it turned out, I guess it was worth something
because they wouldn’t come down on the price.”
As of October 2002, Linda Hanson’s house and property were valued at
$305,070, according to York County’s tax assessment data.
The Hansons, with the help of a couple of contractors, gutted the
inside of the home and added a new kitchen, a fourth bedroom and a
brick-floor family room in the basement complete with a bar.
On the second floor, the Hansons faced another challenge in the form
of insects.
Thousands of bees had built a massive 4-foot-by-8-foot hive on the
far wall of what would become the couple’s master bedroom.
Bee carcasses littered the room’s floor and windowsills, Linda
Hanson said.
“It was amazing,” she said. “I knew that there were bees in the
house when I bought it.”
Exterminators eliminated the bee infestations and, in the process,
some of the home’s wood siding was damaged.
Despite the insects and the initial condition of the house, Linda
Hanson never wavered in her desire to buy the property.
“I’ve seen many old stone houses that are in unattractive locations
and this one wasn’t,” Linda Hanson said. “It was stone and logs, my
two favorite things. I didn’t care what the inside looked like
because you can make the inside look like anything you can want it to.”