How one spot in York County, Pa., says a lot about what is going on around here, Part 5

This nondescript former gas station – it’s really ‘former’ now that it has been demolished – points to a story about change in York County, Pa. Also of interest: How one spot in York County tells much about what is going on around there, 4.

The old filling station stood on the northwest corner of George and Loucks Road (Route 30) for years, decades.

That was no doubt an easy stop for motorists in its day. It was right there for those traveling the major roads that cross there. Not far for motorists with that flavor of credit card exiting Interstate 83.

Then the three decades saw the growth of convenience stores. And the quick lube places. Those filling stations couldn’t match the convenience – so sought after by increasingly busy motorists. Not to mention the prices.

At some point, the George & Loucks service station closed, and a T-Mobile store moved in.

Whatever the communications giant’s marketing message promoted by Charles Barkley, Catherine Zeta-Jones and others, I always thought of the small cellphone store in relation to its inability to fill its oversized parking lot. I mean, nothing in that building nowadays could draw enough traffic to fill that big blacktopped space.

But as it turns out, a cellphone store didn’t need that prominent crossroads site. So then came another strategy to cover all that blacktop: Build a bigger structure, a CVS pharmacy, for example.

Such prominence for CVS – now in a shopping center across the street – is key because chain pharmacies are popping up everywhere.

Those motorists who stopped and said, “Fill ‘er up”?

They’re aging, and the leaders at the pharmacy parent company know a growing market when they see it. An aging population needs its meds.

One thing about all this is that demolition of another nearby service station might have served the community even better.

Farther east on Loucks, an old Exxon station greets motorists coming off the Interstate 83 ramp on their way west.

In its day, it greeted gas-hungry motorists first thing. Now, it gives a rusty, worn-out first impression to motorists coming off the ramp.

Not all buildings can be saved, or should be. Here are two that deserved or deserve to come down.

But as everyday as these buildings were – or are – they say a lot about what is going on around here.

For more, check out the YDR story: Demolition begins in Manchester Township … . 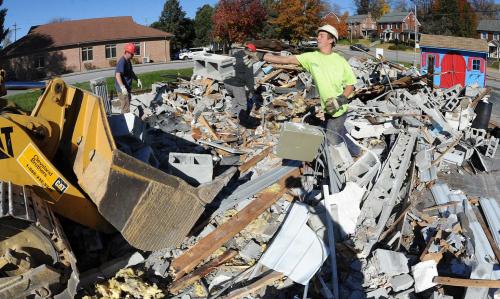