How one big York, Pa., building tells an even larger story 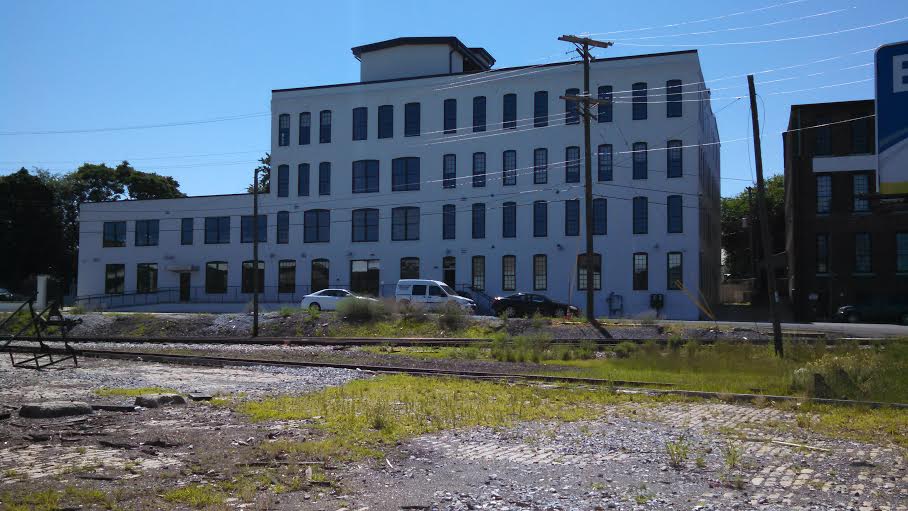 This 210 York Street  building houses members of the rock band Live’s recording studio and headquarters of United Fiber & Data and Think Loud, among other enterprises. Before Live moved into this 53,000-square-foot space, Bi-Comp was in there. And before Bi-Comp, Maple Press operated there. Also of interest: Live’s plans for old Bi-Comp building part of memorable news cycle.

Buildings are artifacts and tell a story about York County’s past and present, much like those buttons and coins uncovered in Springettsbury Township will reveal much about life in the American Revolution’s Camp Security.

So a study of Think Loud’s York Street building – inside and out and from atop and above – can tell us about a changing York County. The following photos provide an exposition of a building-sized artifact: 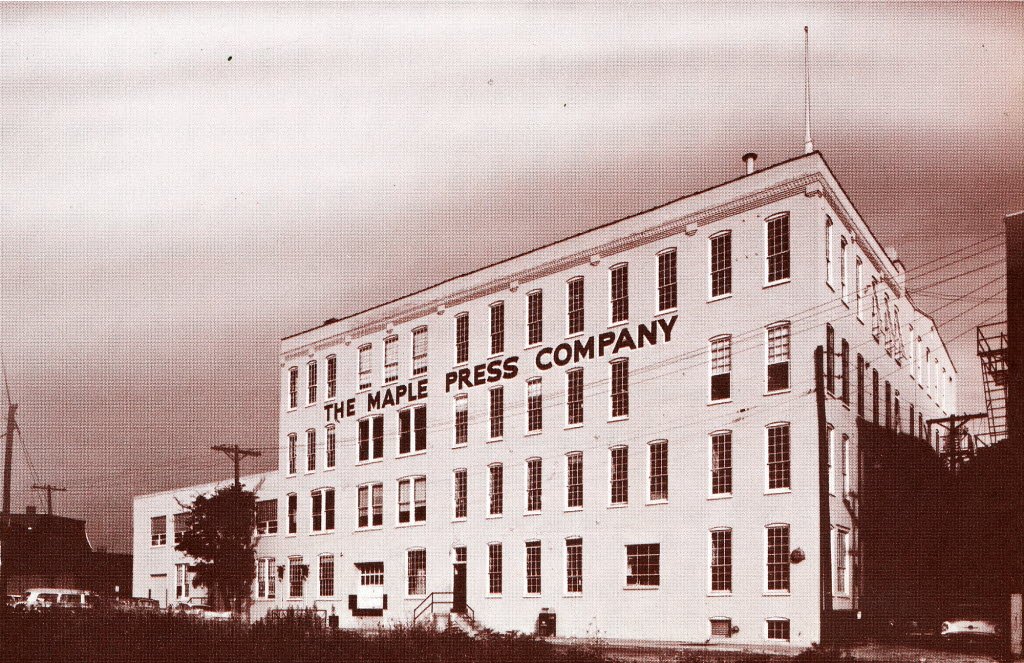 In the decades that Maple Press operated on York Street, the printing process, long mechanical, was experiencing a revolution in technology. In 1968, the book ‘Greater York in Action’ showed this photo and indicated this change: Its product lines ranged from computerized linotype to mechanical letterpress. The printing company touted its new building in Manchester Township housing the most modern equipment for textbook publishing and other tools for education. It’s interesting today that the York Street building’s use will complete the transition. Think Loud’s data center with high-speed fiber-optic lines points to a paperless culture. Also interesting: Maple Press’s new plant in the late 1960s sat in an industrial park, part of the trend of the day to move retail and manufacturing businesses from the city to the suburbs. Think Loud’s interests represent a reversal of that trend, a movement back to the city. See more MediaCenter pictures of the Think Loud building’s interior and exterior – and from its roof: 210 York St. 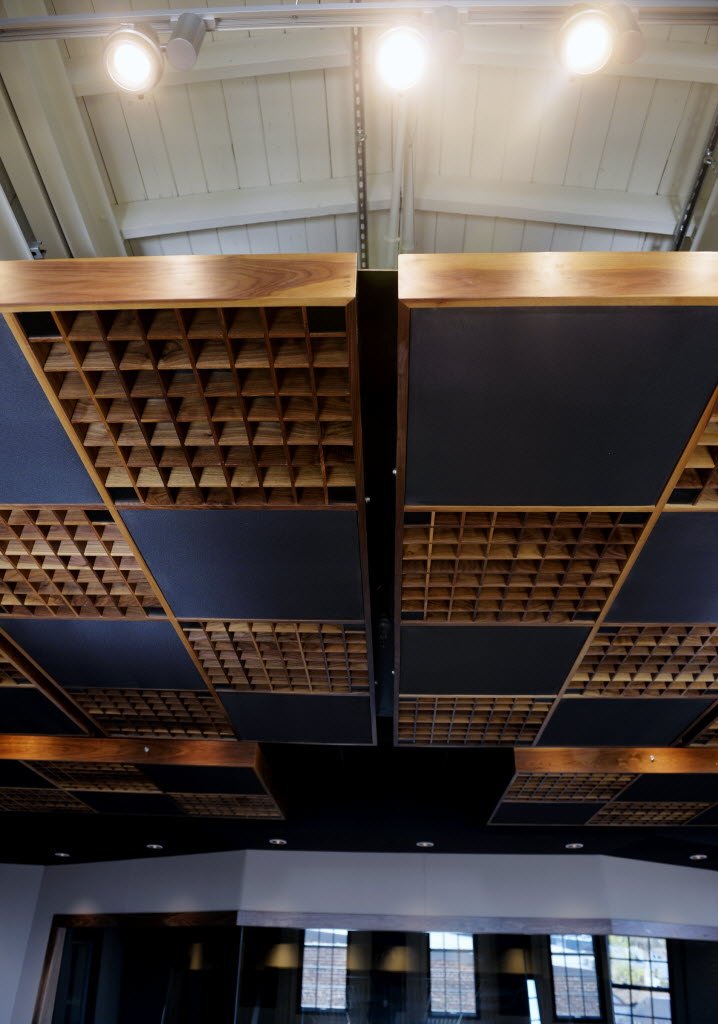 Members of Think Loud retained this pitched ceiling on the York Street building’s fourth floor. That dictated these sound clouds for acoustic integrity. This retention of the original features of old buildings is a form of reuse prevalent around York County. Increasingly, old red-brick factory buildings are being converted into lofts and commercial space, indicative of York’s transition from the industrial age to the information and service age. Also: Inside Live’s studio, headquarters of Think Loud and United Fiber & Data. 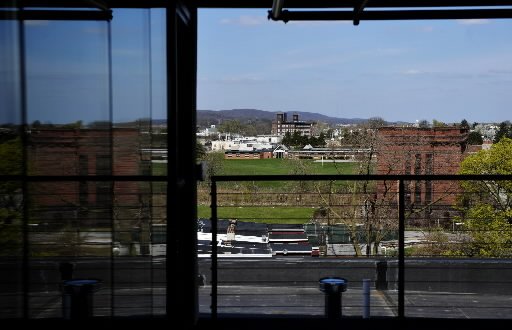 The view from York Street’s roof shows two examples of change in York County. The old Chestnut Street prison, right, has sat empty since 1979. Its Springettsbury Township successor represents another move to the suburbs, where growing population and crime rates indicated an ongoing need for expansion space. Since then, owners have experienced difficulties finding a profitable reuse for the old prison. Ideas have ranged from eateries to apartments to reuse as a gigantic haunted house. Think Loud also has expressed interest in the old structure. Interestingly a prison has stood on that once-rural site since the mid-1800s, when it was moved from a congested South George Street location. The incarceration of criminals has been a long-standing growth business. Also, standing like a towered fortress in the background is one of those red-brick factories, this one designed by the Dempwolfs, York’s marquee architectural firm. The former silk mill now houses apartments, but outside features – those towers in particular – have been retained from the days that workers made pajamas there. Also: Live, Think Loud work, live and play at 210 York. 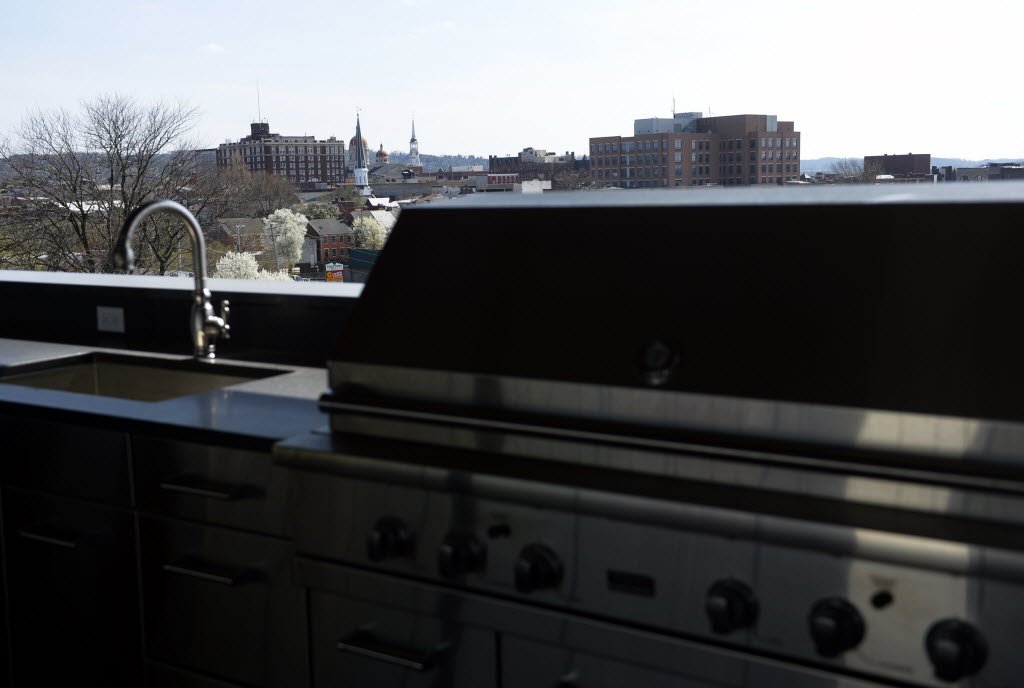 Looking west from the York Street roof, the domes of the old York County Courthouse, the third courthouse since the mid-1750s rise next to the Yorktowne Hotel. Courthouse No. 4 can be seen to the north.  By the 1790s, York’s government had outgrown Courthouse No. 1, so a second building went up next door in York’s Centre Square. The same thing happened to the old courthouse pictured here. Government and particularly the court system dictated the larger judicial center – Courthouse No. 4, dedicated 10 years ago. So even in government-averse York County, government has grown from the county’s earliest days and so has the size and number of buildings for public functions. But here’s another thing: The judicial center on North George has helped shift the heart of York City to the north and west, away from Continental Square. Also of interest: See this view of the Yorktowne and Courthouse No. 3 from the roof of Courthouse No. 4. 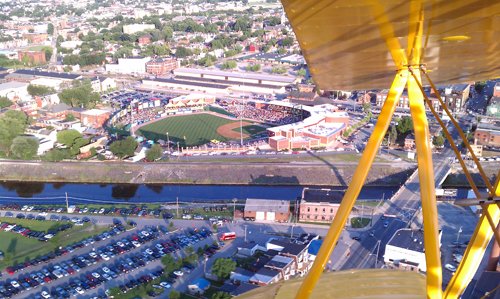 This 2011 photo shows the blocky Chestnut Street prison at 11 o’clock. Look about a block to the west and you’ll see Think Loud’s building, standing next to a red-brick building. Mary Ellen Thomson, the photographer, in capturing the Atlantic League All-Star game in Sovereign Bank Stadium, also showed the proximity of Think Loud’s headquarters to the growing stadium district. The stadium forms a kind of keystone between Think Loud and other development to the east and the York County Judicial Center/Market District to its south and west. The heart of the city has shifted toward the latter. Will Think Loud’s enterprises attract development and other business activities in its direction as well? Also: The art and soul of York City from the air.

– Check out this story about Live’s new album, recorded at 210 York St.

*York Daily Record/Sunday News file photos except for photo No. 2, courtesy of ‘Greater York in Action’