York County, Pa., had more than 300 mills at one time. That means that its streams were crossed with more than 300 dams that backed up the creeks to supply the raceways that carried water to the mill wheels. Eight lowhead dams remain on area streams, although not all can be connected to mills. Conewago Creek’s Shady Nook Dam near the Davidsburg Road was built for recreational purposes in the 1930s. That dam made the news recently when it took the life of a York County boater.  Here, rescue workers look for the victim. Additional photos at YDR.com’s Media Center. Also of interest: Books tells about York County mills and millers.

York County’s mills are usually quiet places in scenic settings. But their association with mill dams have propelled them into the news for years.

Sometimes, that comes from the seemingly endless march of boaters or swimmers who traverse the tops of these dams, get caught in the undertow and are pulled down to their deaths. Some of these dams also have been breached over time because they are impediments in the spawning of migratory fish.

Still, many people enjoy the slack-water pools backed up by the eight remaining privately owned dams within York County’s borders. And the stately mills that stand today often are used for a variety of productive or popular things – apartments, businesses and haunted mills.

So here’s are 6 quick snapshots of mills that have been in the news in recent months, indicating the prominent role they still play in York County life: 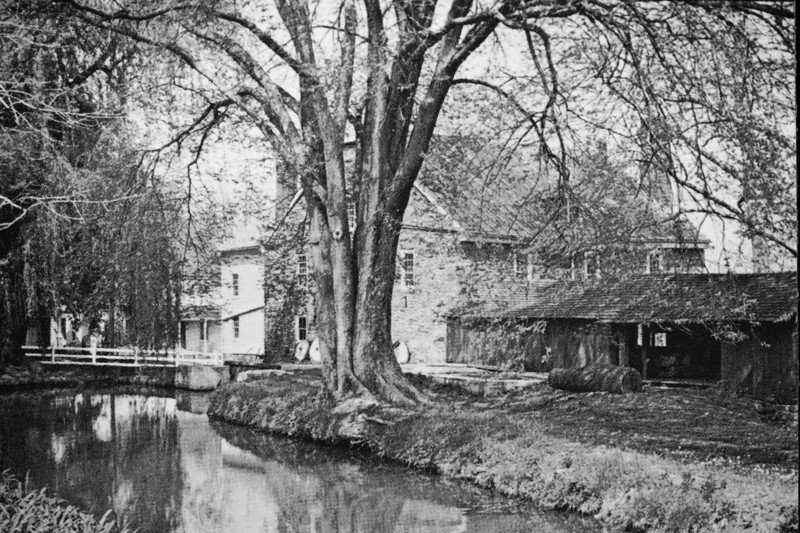 The Colonial Valley Mill in Menges Mills has been marketed as a haunted mills for years. It recently changed hands as part of an auction and will continue on as a Halloween attraction under its new owner. 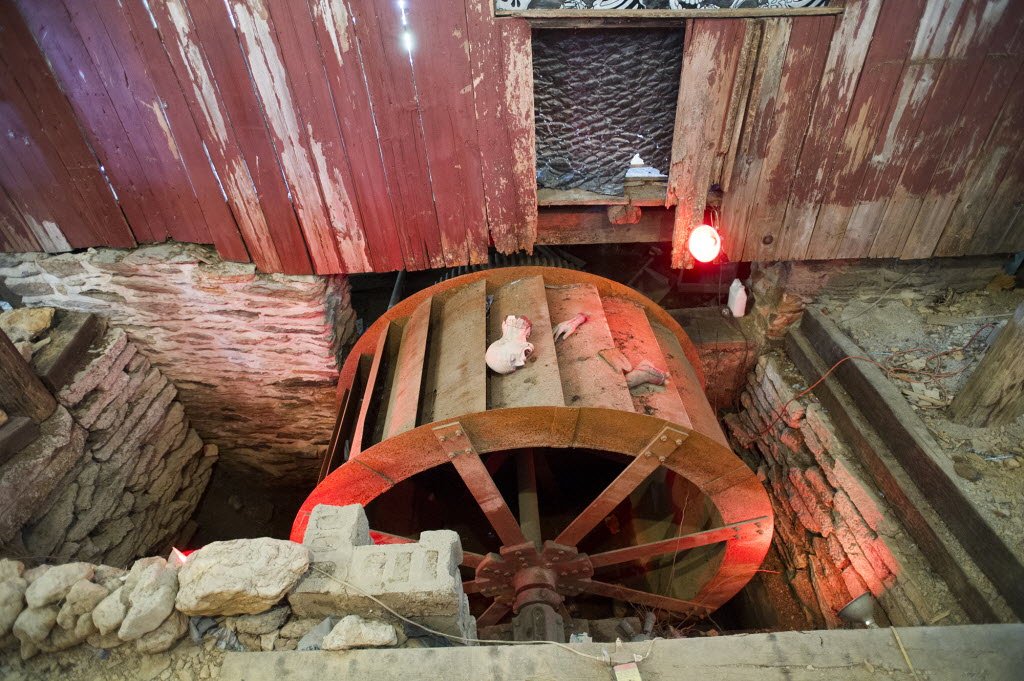 The intact water wheel at the stone mill in Menges Mills. This is not a large wheel, but you can imagine the amount of water it took to turn it. Thus, dams went up on area streams to divert creek water into a race way that would then be funnel into the mill area to power the wheels. To see how old mills operated, check out the York County Agricultural and Industrial Museum or the Cross Mill near Cross Roads.
+++ 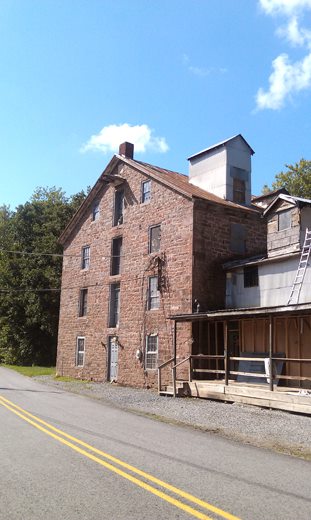 Harry Hykes old mill near Strinestown also has operated as a Halloween attraction. In recent years, the waters of the Conewago Creek have flooded the structure. Of course, mills have always been susceptible to flooding, built near waterways. But the mills of old never had the electronic gear needed to enhance the haunted experience at today’s parks. 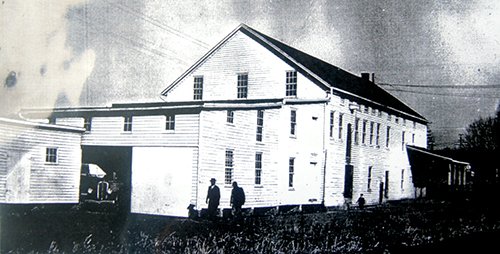 This Seven Valleys mill appeared in a recent Codorus Valley Historical Society newsletter. It’s an example of a mill that has experienced many uses. Ray Kinard, part of the “K” team with Terry Koller, who have explored many of York County’s  mill site, says this about the A.C. Henry Mill. ‘I worked in this mill and eventually tore it down in the sixties. Nathen Gladfelter built this building in 1886 as the Mt. Vernon cigar factory. The factory closed in 1908 because of financial problems. It operated for several years as a sewing factory. In 1926 A.C.Henry was operating a mill at Gladfelters Station. He bought the Mt. Vernon cigar factory and turned it into a modern mill. He operated this mill until around 1950 when he built a new mill across the street. Which burned 0n Easter Sunday 1978. 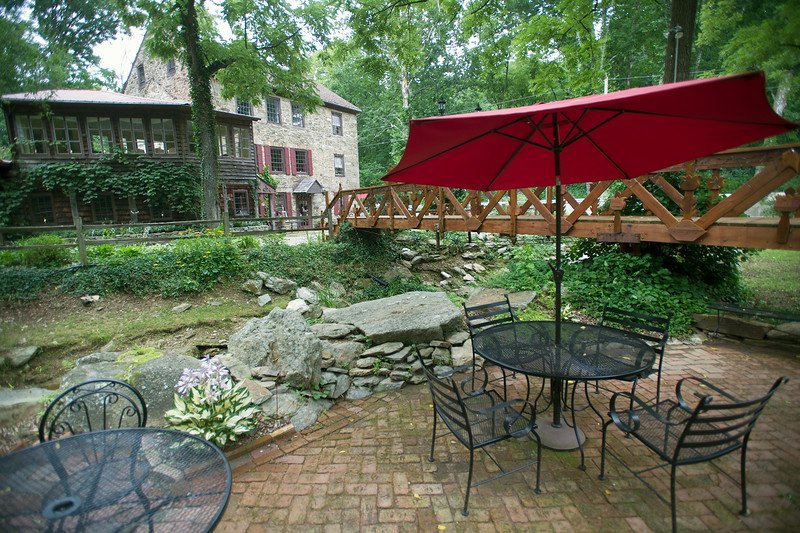 Stone Mill 1792, near Glenville in southwestern York County, is seeing new life as a wedding and event venue. Interestingly, this use carries on the long term association of mills with community meeting places. Farmers in rural areas would go to mills for reasons other than milling grain. It was a place to see neighbors and exchange information, sometimes known as gossip.
+++ 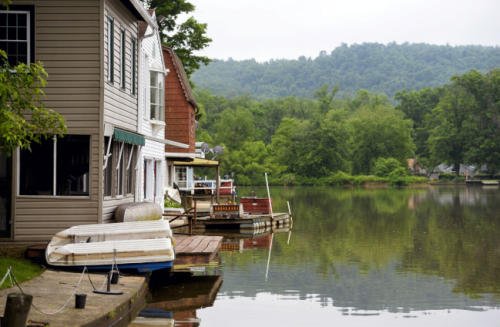 This is little-known Silver Lake in northern York County. It’s actually an old mill pond, the impoundment caused by the damming Bennett Run to provide water for the nearby mill (still standing).  Silver Lake has been in the news because its homeowners association is working to conform to state regulations concerning its dam. So we’re back to the safety of York County dams, again. The lake, by the way, got its name because of the blue color of clay at its edges gave the lack a silver appearance, a York Daily Record story says. See: At 75, one woman’s crusade to preserve historic York County lake.

The York Daily Record weighed in on the presence of lowhead dams on York County’s streams.

Check out the book Millers’ Tales for photos of numerous York County mills.

This site, Millpictures.com, has photographs of 54 York County mills and more than 800 in Pennsylvania.