Abraham Lincoln: How many times did the 16th President’s trains touch York County? Part I 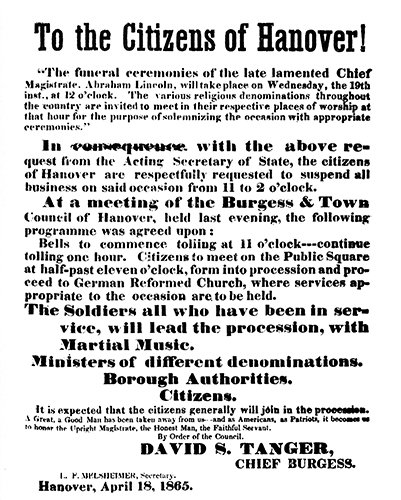 This handbill from Chief Burger David S. Tanger calls for attendance at a Hanover service to commemorate Abraham Lincoln in life and in death. Notice that it called for a procession to the church and the comments in small type:  ‘A Great, a Good Man has been taken away from us – and as Americans, as Patriots, it becomes us to honor the Upright Magistrate, the Honest Man, the Faithful Servant.’ In Hanover, York and other towns, large and small, across York County and America, this mid-week service was a major, well attended event.  Also of interest: All ‘Abe Lincoln was here’ posts from the start about 100 of them and For a detailed account of Lincoln train’s visit in 1861, check out: Lincoln train, Part II.

How many times did Abraham Lincoln’s presidential trains roll through York County?

His Gettysburg trek through Hanover Junction is well known.

His funeral train’s visit 150 years ago – on April 21, 1865 – is becoming better known because of extensive York Daily Record news coverage.

But what about the time that Abraham Lincoln’s train arrived in York, Pa. – without Lincoln aboard?

That happened in February 1861 when the president-elect was on his way to take office in Washington, D.C.

An assassination plot was rumored in Baltimore. So Lincoln traveled from Harrisburg to  D.C. via an alternate route. His train, now a decoy, kept its appointment in York, sans the president.

An interesting point is that assassination plots against the president, or rumors about such schemes, abounded even before he took office. That sadly came true 150 years ago, on April 14, 1865, at Ford’s Theatre in the nation’s capital.

Here’s a summary about Lincoln and York County from this list of presidential visits from YorkTownSquare:

‘On his way to Gettysburg for his famous address in 1863, Lincoln’s train paused in Hanover after he had changed trains at Hanover Junction. “Father Abraham,” someone called out, “your children want to hear you.” The president emerged from his car. “Well, you have seen me,” Lincoln said, “and according to general experience, you have seen less than you expected to see.” Two years earlier, Lincoln’s train, without the president-elect aboard, paused in York. Lincoln had been rerouted because of a suspected assassination plot. His absence disappointed a large York crowd. In 1865, Lincoln’s body was aboard his touring funeral train when it stopped in York. Within earshot of a Philadelphia Inquirer reporter, an elderly black man proclaimed, “He was crucified for us.”’ 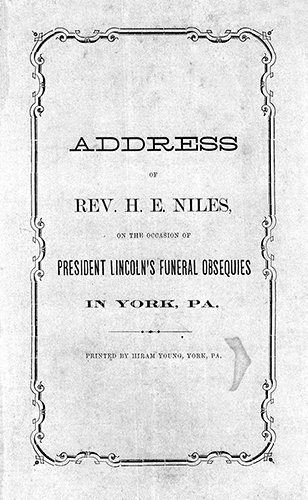 This was the cover of the printed address by the minister of First Presbyterian at the commemoration of Abraham Lincoln in York. Also of interest: Easter 1865 came in a season of conflict for York, Pa.