How Gettysburg celebrated the 50th anniversary of the battle: Linked in with neat history stuff, May 29, 2012 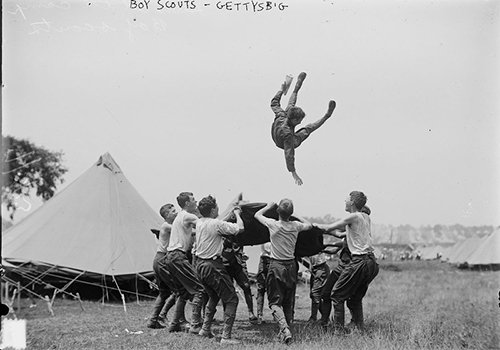 Gettysburg 150 is beginning to move up in the news, as it should. So, it’s interesting to see how Gettysburg 50 and other marker anniversaries were observed. Here, a Library of Congress photo, one of a set, details the Great Reunion, in 1913. Veterans of the North and South came to the Pennsylvania battlefield to shake hands and swap stories. As in the 75th in 1938, Boy Scouts played a role in escorted the aged veterans. Some people in York County today served as guides and witnessed the bearded vets on the 75th anniversary. See this photograph and others at ydr.com’s Media Center. Also of interest: Headline: ‘Beards on Parade at Gettysburg (Battle) Field’.

An emailer queried Joan Concilio over at Only in York County about the locations of the York Fair, “America’s First Fair.”

Here was my response to Joan:

“Not sure that America’s First Fair is accurate. I’ve never seen any documentation of that. But that aside, it was at first in Centre Square, then moved to the southeast corner of King and Queen and finally to West Manchester Township location …  where it is now located. There were some years, many years, in which York didn’t have a fair, btw.”

Pa. Gazette the first: The York Dispatch’s planned move to 1891 Loucks Road takes the newspaper out of the City of York.

The first newspaper appeared in York, then a village, in 1777. The Pennsylvania Gazette operated for about six months during Continental Congress’ visit. At one time  at the peak of newspapering in the 20th century, four newspapers operated in York City: The York Daily Record, York Sunday News, York Dispatch and the Patriot-News.

All roads lead to York? It seems that way. The crew chief for this week’s Indy 500 winner, Tony Kanaan, is a Susquehannock High School grad.  Chief Jeff Simon told the York Daily Record/Sunday News that he was nervous because his teams had been close before and not won. But now his team is on top.

I was checking out an audiobook at Martin Library last week when a librarian mentioned that my Civil War book was a part of a Civil War display. I thought it was Scott Mingus and my new book, “Echoing Still, More Civil War Voices.” It turned out to be ‘East of Gettysburg,’ my book from about 10 years ago that interestingly just came out as an e-book. So I made sure that Martin and the York County Library System has a copy of ‘Echoing.’