How far the old Gettysburg Cyclorama building has fallen. Linked in to York/Adams history, 1/11/13 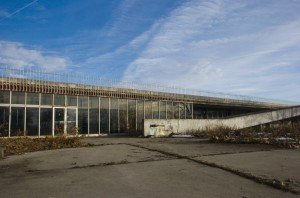 It hurts to look at this. This Hanover Evening Sun photograph shows how far the old Gettysburg Cyclorama has fallen. And it will now fall down all the way, coaxed by the bulldozer. The National Park Service told the world this week that it will demolish the building, longtime source of memories for thousands. Some had hoped it would be converted into an Abraham Lincoln museum. Instead, the ground will be restored to its 1863 appearance. Check out this Hanover Evening Sun story about the planned demolition. Also of interest: Old Electric Map lifted up, then settles into new Hanover home

Cooper H. Wingert is a South Central Pennsylvania student who has written for Gettysburg Magazine and other Civil War periodicals as well as his four books.

Fourteen years old. Five books. History is in good hands in the future.

Her topic this year will be the role the Susquehanna River played in helping slaves escape to freedom. The production focuses on the 10 counties that border the Susquehanna. Amanda Berry is the focus in York County.

Forum of the day: A Facebook post on Shady Maple Smorgasbord’s page notes that the restaurant was featured on the game show, “Who Wants to be a Millionaire?”According to the question, the popular buffet-style restaurant in Lancaster County gives discounts to folks who have undergone gastric-bypass surgery. Smorgasbord of a Pennsylvania Dutch variety are popular around here. Who as the best. Shady Maple? Please comment below.

The butter sculpture is always a highlight at Pennsylvania Farm Shows. So click on the images and see a slide show of this year’s entry.