How about a little hog maw with your oyster stew? Only in York County, Pa. 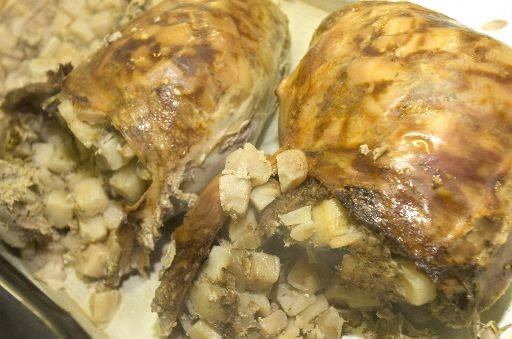 Hog maw is a popular Pennsylvania Dutch dish. Mount Royal United Methodist Church, near Dover serves it at hog maw/oyster community dinners. Their recipe is below. And below is a bit on another Pennsylvania Dutch delicacy – sauerkraut and pork. Or pork and sauerkraut, as some say. Also of interest: Other York County hog maw recipes.

Oysters are a York County delicacy, but some people think you have more of a good thing when served in combination with hog maw?
Two iconic county delicacies served side by side.
And add to that meat loaf.
That’s what’s on the table at regular Mount Royal United Methodist Church fund-raising dinners.
“Hog maw, oysters and meat loaf are the specialty meals and are prepared by cooks with years of experience,” a history of the Dover Township church states. “The dinners constitute a unique Mt. Royal church dining experience topped off with homemade pies and cakes and a refreshing drink.”
What is hog maw, so popular around New Year’s as a rival, or perhaps a complement, to sauerkraut and pork?

+++
Georg Sheets’ “Facts and Folklore” defines it as fresh, clean pig’s stomach stuffed with sausage, potatoes, onions, celery and a special blend of herbs that is baked in the oven.
It’s served as main course, usually for supper and sometimes for Sunday dinner.
“In this case, the proof is not in the pudding but in the tasting,” he writes.
The Mount Royal history even shares a recipe for hog maw, titled “Hog Maw Recipe for Family,” as contributed by church member Mary Dentler:

1 nicely clean hog stomach
3 quarts of raw potatoes diced in small squares
2 pounds of sausage meat
1/4 pound of hamburger
1/2 cup of finely cut celery
Small amount of parsley
Salt and pepper to taste.
Mixed the ingredients and fill the stomach. Bake in oven for 3 to 3 1/2 hours at 350 degrees. When done, it will be lightly brown on top.

To pull all this together, here’s a York Daily Record story from 1997 on Mount Royal’s unusual festival:

It has been almost 40 years since Mount Royal United Methodist Church started opening its church doors to York County dinner guests.
The monthly menu is unusual: hog maw and oyster, but the combination works.
“We do all right,” said Ruth Drawbaugh, who has been helping with the dinners for about 12 years. “We raise between $700 and $800 each month.”
Mount Royal, like many other local churches, has had to find unique ways to raise funds.
“About 40 to 50 people attend church on a Sunday,” said Charles Drawbaugh, who has written a history of Mount Royal, a rural church north of Dover with a small congregation. “We need support other than collections and offerings.”
The Rev. Patrick Walker, executive director of the York County Council of Churches, said fund-raisers like the hog maw dinner often are tied to the historical identity of the church.
Mount Royal has been offering its dinner since the 1960s.
“The hog maw dinners help supplement, but it’s also part of who they are as a people,” Walker said.
Fund-raisers typically are designated for a specific cause or ministry, sometimes to purchase items for new buildings, Walker said.
“It’s been going on forever,” Walker said. “It’s not unusual for me to hear of churches doing raffles or having yard sales or baked goods.”
The Unitarian Society of York, 49 E. Springettsbury Ave., has raised money for its general funds through an annual auction. This year’s auction, which was held Jan. 25, raised about $7,100, said auction chairwoman Pat Forster.
The theme was Tropical Island Cruise. Caribbean music, decorations such as palm trees, and Hawaiian pizza helped create the atmosphere, she said. “Many of the people wore tropical outfits,” she said.
To help with the auction, church members volunteered to prepare dinners.
“One of the ladies offered a tea party for four,” Forster said. Members also donated computer services, bridge lessons, tai chi lessons and massage therapy, she said. Some of the teen-agers got involved by offering to babysit.
“One of the members bought the chance to pick the topic of a sermon,” she said.
In a United Methodist fund-raiser, the ministers get into the annual act. A cluster of 18 United Methodist churches in the York area have offered a pastors’ talent show for the past two years, said Becky Pearson, the cluster youth worker.
“The pastors are willing to share their talents beyond preaching,” she said. “The pastors have sung, played musical instruments, told jokes, given dramatic presentations and told stories.”
About 225 people attended last year’s show, raising close to $700 for the cluster youth program, Pearson said.
The Mount Royal hog maw and oyster supper is run by the church’s Ladies Aid, the Royal Sunday class, “and other people from the church who like to do these things,” Charles Drawbaugh said.
The suppers are offered on the third Saturday of every month from October through April, except December. Preparations begin at about 8 a.m. The food is served from about 4 p.m. “until we are out of food,” which is usually about 5:30 p.m., Ruth Drawbaugh said.
“We get the hog maws done first,” she said.
Hog maw is baked hog stomach stuffed with sausage, hamburger, potatoes, celery, parsley and a touch of salt and pepper.
Also, the church crew prepares fried oysters, oyster stew, stuffed chicken breasts, mashed potatoes and gravy, baked beans, corn, harvard beets, whole fried potatoes, cole slaw and applesauce. Meatloaf, hamburgers and french fries are made for the kids. Homemade pies and cakes are offered for dessert.
“People come from all over the county,” Drawbaugh said.

– All posts about the Pennsylvania Dutch from the start.

– Check out these numerous stories about how York eats: Hog maw and such. 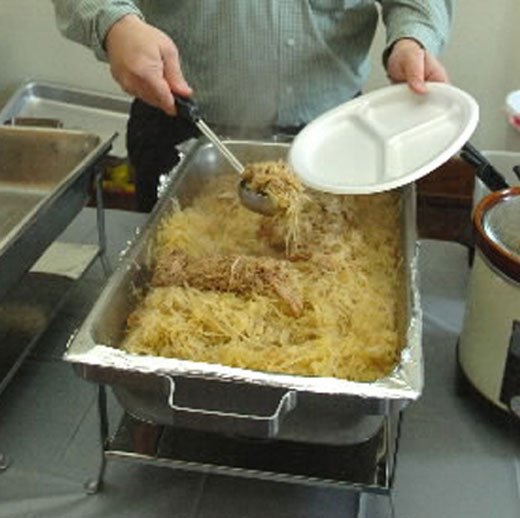 Another Pa. Dutch delicacy: Pork and sauerkraut, particularly popular on and around New Year’s Day. Only York’s Joan Concilio writes all the time about York County food. See: New Year’s pork and sauerkraut, the 2012 edition. Here’s one comment on Joan’s blog from a non-fan of P & S: ‘I hate sauerkraut. But I eat one strand for good luck. LOL!!!’ Also of interest: Did you know that York had a neighborhood known as ‘Sauer Kraut Hill?’