How a photograph of a creeping Voith runner tells a 1,000 words about change in York County

A large runner from Voith Hydro prepares to cross the York County Heritage Rail Trail on Valentine’s Day. Meanwhile, a cyclist spins along the trail.  The scene illustrates the new (service industry represented by cyclist) and the old (Voith’s heavy manufacturing) in York County. (Click on photograph to enlarge. See additional photo below.) Also of interest: How come few in York know about S. Morgan Smith anymore?

A York Daily Record/Sunday News Newsmaker piece (2/19/12) discussed the green connection in the intersection of the Voith runner and the cyclist on the rail trail. (See that discussion below.)

Meanwhile, there’s another point to that intersection.

Voith was founded by noted York manufacturer S. Morgan Smith in the Industrial Revolution. Or at least Voith is one of four offshoots of the original S. Morgan Smith company. It’s an old, heavy manufacturer, literally, maker of big turbine blades, or runners, among other big things.

But it’s found a way to navigate in a world that is increasingly appreciating environment friendly water power. Meanwhile, a biker represents a newer industry – tourism.

As the older industries in large factories consolidate or downsize or close, the recreation industry has been growing. Rail trails – the recycling of old rail and trolley lines – represent the promise of that sector.

“At the left in the image … there’s a tractor-trailer carrying a 150-ton turbine runner at 4 mph from Voith Hydro to the Holtwood dam – part of an expansion project to double the dam’s power output.

“At the right there’s a cyclist on the rail trail. Both headed toward an intersection.

“Bicycles and turbines are both at the intersection of green power.

“Don’t like being stuck behind a slow-moving truck? Get on your bike.”

– See a video of the slow-moving Voith runner caravan in action, plus a map of its route.

– Vermont windmill: ‘That turbine was built at the S. Morgan Smith company, right here in York’ 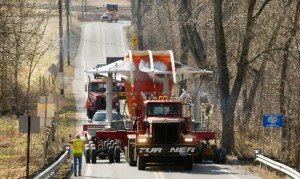