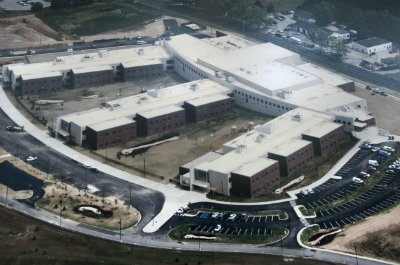 Aerial photographs are helpful in giving big picture perspective. Such as the size of some of the newer schools in York County. This view from a March post shows the grand size of Central York High School. Here is the bird’s-eye view of the Dallastown Intermediate School in Jacobus. The vehicles in the parking lot give a sense of perspective in this scene that resembles a spaceship on its side. (See interior view below.) Also of interest: Check out these aerial views of York County scenes.

Other neat stuff from all over  … .

A thoughtful commenter disagreed with my recent blog post/York Sunday News column that well-meaning efforts to rehab the grave site of a Confederate soldier from the rebel raid of York County in 1863 should just end:

“I know that this is about an article from 2 weeks ago, (May 20th) but I disagree with the conclusion about the Confederate soldier. Although he deserves to rest in peace as we all do, IF you let the memories of his cause fade away how can we hope to learn from the mistakes of the past. I’ve heard people are trying to do the same thing with other events in the past including the WWII death camps.”

“The contrast between the forgotten Negro League player and the unknown rebel was just too great to pass up. It’s indeed the story of two missing grave markers: http://tinyurl.com/7ufw4bb. What that Confederate was propagating – including the continuation of slavery – led to segregation of baseball and many other things. I just wanted us to think about glorifying a soldier who invaded our land and could have been a spy. The likes of him ruined our farms, terrorized our women and children and caused two deaths in fighting at Wrightsville and 300 casualties (both sides) at the Battle of Hanover. Plus, we have enough Confederate flags evident on houses and on license plates in our school parking lots around York County. Do we need any more to remember the day that a foreign invader – the South had its own Constitution – marched across our soil?”

Lacking Laucks info: Ginger Loucks, reunion coordinator for the Laucks family later this month in York, is looking for some info on industrialist S. Forry Laucks:

If you have information, contact Ginger: loucksg@maplenet.net. Otherwise, as I mentioned to her, the answers are probably at the York County Heritage Trust library.

No place for guns?: Would hunting hurt Gettysburg battlefield? Sparked by federal legislation, it’s a fight between sportsmen and conservationists at the Gettysburg Battlefield. From the Hanover Evening Sun: ‘Opponents say the Sportsmen’s Heritage Act is a “Trojan horse” that would permit paintball games, off-road vehicles, and target shooting at solemn places, including the battlefield.’

Good old days were at least old: After several posts on nostalgic moments, I put into a commenting thread on this blog – in which I was participating – a balancing thought: Not to get overly serious here, but the present does have some advantages. We look at some of the racism at the York Fair, evidenced in this post. And the then there’s this post about  the often deadly rigors of childbirth.

“Still,” I concluded, “I’d take that seat on a time machine.” 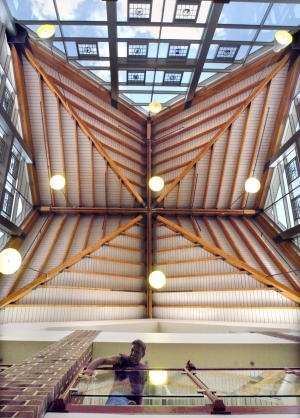 The Dallastown Intermediate School photo above was part of a story about engineer Kerryn Fulton of C.S. Davidson in York and some of her projects. This photograph from Central York  High School’s atrium is another such project.
Also of interest: