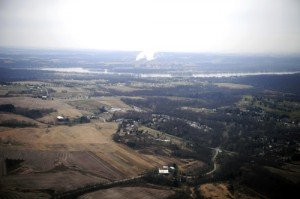 This aerial view from above northeastern York County shows the steam plumes from the two operable cooling towers of Three Mile Island. Actually, you don’t need a bird’s-eye view to see the plumes. Look in that direction from the York-area or driving north on Interstate 83, and you’ll see the steam that cools the operating nuclear reactor rising above the high towers. This week marks the 33rd anniversary of the partial meltdown of TMI Unit 2, for years the world’s worst commercial nuclear accident. The accident occurred at 4 a.m., March 28, 1979. For a concise description of the accident, see this World Nuclear Association graphic. This iconic photograph shows TMI at the time of the disaster. (Click on the photograph to enlarge. See links to additional aerial views below.) Also of interest: Goldsboro shares Three Mile Island’s spotlight and Where can this plaque be found?

Blake Stough, over at Preserving York blog, has introduced an interesting – and welcome – feature to his history work.

“In an effort to help the readers of my York County history blog understand where some of the places I write about are located, I created an interactive map. The map shows the location name and includes a photograph when possible, brief description, and link back to the original story. ”

I often tell people that students of history and, well, just students of anything have access to more historical research than in the history of York County via the web. You have Blake’s work and the writing of June Lloyd and Scott Mingus and Joan Concilio. You have the York County Heritage Trust’s new blog.

Also importantly, you have the ability to interact with these historians via their blogs or their considerable social media work on Facebook and Twitter.

History will remember this moment when York County historians were transitioning the public airing of their work from paper-only to paper plus digital.

Celebrity roll call: Wonder what celebrities have visited York County, or who at least been interviewed by the York Daily Record/Sunday News? Check out this celeb list. Did you ever wonder why I would put such as this and the Celebrity roll call, II on a history blog? Community history books often cite appearances by luminaries – Edwin Booth, for example – who visited York 125 years ago. And famous people coming from a community – John Durang, for example, are often cited in history books.

Dell for sale: An open house is planned for the renovated Shady Dell, the former southside teen hangout, in mid-April. Want to own this nostalgic place? $399,000.

More nostalgia: Find out where Joe Bury’s Famous Hamburgers are being sold other than at the York Fair by liking their Facebook page.

YorkBlog post of the day: Bone up on the following, at Yorkblogger Joan Concilio’s Only in York County: