How a bird sees the original hub of York College: Linked in with neat history stuff, March 27, 2012 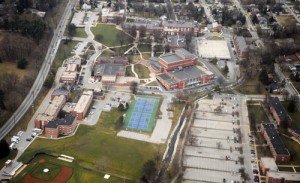 York College of Pennsylvania now sprawls all the way to Richland Avenue. This aerial photograph shows the eastern part of the campus, the hub from which the campus grew. This part of campus sits on York’s first golf course, later the Country Club of York and later the Outdoor Country Club. For a graphic of the entire campus showing York College’s reach to the west and north toward York City, check out: YCP’s expanding presence. (Please click on photograph to enlarge.) Also of interest: Who was McKay of York College’s McKay Hall fame?

The church was founded in 1752, three years after York County was formed.

Event organizer Terry Downs wrote the following on Facebook about a couple of no doubt many distinguished visitors to attend festivities:

“There are so many high spots that they’d be too numerous to mention, but one is meeting a grand lady, Jane Zirnkilton, whose father was York Pennsylvania businessman Beauchamp Smith. Many fond memories of Mr. Smith, especially when his gardeners provided the floral displays at York First Moravian in my childhood … . Also having sons Frank and Steve Zirnkilton and their daughters was one of those euphoric moments meeting the family.”

Many people are familiar with the Smiths, descendants of former Moravian Pastor and York industrialist S. Morgan Smith. Many folks also may know Steve Zirnkilton, or at least his voice. For details, check out: Steve Zirnkilton has performed … .

A shoe is a shoe:  Sometimes, a good quote just hangs in the mind, especially when it is authentic. Such is a recent quote from June Lloyd.

When June was at the York County Heritage Trust, she deftly offered a voice of reason and realism.
That voice is still being heard in the community, as the Trust’s Librarian Emerita was asked to weigh in about findings of shoes, boots and even flattened frogs in the walls of buildings in the region. Some believe them to be a form of ritual.
But another possible explanation came from June in a newspaper story today:
“Sometimes a shoe is just a shoe,” she told the York Daily Record/Sunday News.
factory building.

Quiz of the day: One Smoketown in York County is now on the floor of Lake Redman. A second Smoketown was also known as Dogtown.  Any other Smoketowns in York County’s past or present? Wonder why we had so many? Answer: Smoketown a popular York County name a century ago.

Forum of the day: Exchangers continue to list things made or once made in York. Interesting stuff coming out over there.