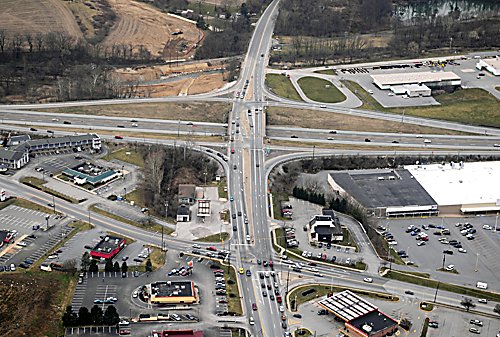 Yorktownsquare.com readers maybe familiar of the Mount Rose intersection in suburban York, Pa., from this bird’s-eye view. Well, this aerial view from February gives a different vantage point of this busy intersection, that is undergoing extensive rehab work for the next several years. To understand the planned changes, including the relocation of several business, see the ydr.com’s Exit Strategy. To orient you, the waterway at top is Mill Creek flowing in from Ore Valley, following the interstate for several miles before emptying into Codorus Creek. And that’s Kmart shopping center at right. Also of interest: Where was the site of Camp Betty Washington, along the road so named? and So, can you find long-gone Springwood Park in this aerial photograph? (See additional York-area aerial photos below.)

Victoria Tunnermann is searching for a photo of Ralph M. Gross of the Dover area.

“I recently read your article about the exhibit, “Front Porch to Front lines,” she wrote. “My daughters (homeschooled) and I have been researching WWII, including the roles of those on the home front, and we have acquired several stacks of letters to and from soldiers.  Two individuals (husband and wife) are from the York/Dover area, and although I have photos of the woman, I am finding it difficult to locate any photos of the man beyond his obituary.

“The photo I am looking for would be of a Ralph M. Gross, of Dover/York, Pennsylvania, taken during the time he was serving in the Army Signal Corps in WWII.  I was wondering if you would happen to know where I might be able to obtain such a photograph.  I have managed to locate the obituary that appeared in one of the York papers, but that photograph is of an elderly Mr. Gross.  For our research, and to help my daughters put a face with the name, I was hoping to obtain a photo of him in uniform.”

Why is this New Jersey family interested in a York County veteran?

“The 1940’s and WWII were an exceptional time in history, and I appreciate all that was done for our country, both here and abroad.  I feel privileged to have these letters in my possession, and I would like to place Mr. Gross’ photo alongside them.”

I think those home schooled girls are learning some valuable lessons from mom.

Abe for children: Learn about Abraham Lincoln’s life, in words of one syllable.  Check out: Papergreat.

150-year-0ld bread: The curator of the Civil War museum in Harrisburg is building an oven on the grounds to bake Civil War-style bread. Read more at the Hanover Evening Sun.

Forum of the day: Over at Only in York County, Joan Concilio is fielding comments about butcher shop memories.

Linda Sleeger-Williams is perhaps one of those so inspired. At least, she left this comment on the post: On the happy trails of Shorty, the Prairie Pals and Raw Hide, York County, Pa., entertainment icons:

“I remember going to Valley View park on Sundays when I was a kid. I saw Marvin Rainwater there more than once. There were picnic tables and we used to take a picnic lunch with us, mostly fried chicken and potato salad and baked beans. I’m related to the Inners of Inners Amusements, and they had cotton candy, candy apples, and such for sale.

“I remember one time in particular that it rained cats n dogs, but mom and dad wouldn’t leave… .  (H)e came out on stage and said that if we waited all that time to hear him sing, then by God he was gonna give us a show. And he did. I was only about 4 or 5 years old, so I wasn’t really impressed. As I got older, I found pictures we had taken and what a surprise!!!! I had seen Hank Williams Sr. and he was great, (as great as a 4-5 year old could think, anyway). I wish I could see him now. What a memory.”