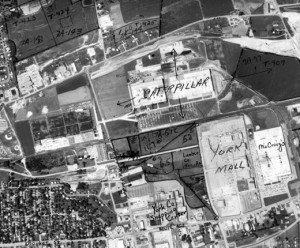 This is the view of the York Mall/York County Shopping Center area of Springettsbury Township in 1971, courtesy of York County, Pa., resident Stephen H. Smith. Stephen helps us understands what’s where with his neat notations. And he has the date of this Farm Service Agency photograph, Aug. 11, 1971. (Click to enlarge.) Also of interest: How stores moved to suburbia: From top dog and hot dogs to dogfight and dog days in York County, Pa.

Yorktownsquare.com readers have seen aerial photos of the early days of the York Mall/York County Shopping Center looking east to west. And west to east.

Now Stephen Smith has provided a top to bottom shot, straight down at this shopping hub – and it was the York-area shopping hub – in 1971. (The view, probably through a special built hole in the floor of an airplane, is enough to make a bird airsick.)

Stephen provided these detailed notes (with some punctuation added) of what we’re seeing:

East Market Street runs along the lower part of the photo. I was puzzled to see it noted as Route 462 until I was informed that the notes were added by the Farm Service Agency in the following year (s). Looking in newspaper ads, I see businesses that do not use Market Street addresses still refer to Route 30 through the end of 1972; i.e. a York Mall ad of 22 Nov 1972 notes their location as Lincoln Highway (Route 30) East.

From York newspaper accounts in days after the Route 30 Bypass opened, Market Street is now Route 462. From the Daily Record issue of Sat. Nov. 25, 1972 page: “Having tortured my way through the traffic on the old route – which, incidentally, is now state Route 462 . . . .” From The York Dispatch issue of Fri. Nov. 24, 1972 back page: “With the opening of the full 20 miles extending from a point near Thomasville to Columbia on the Lancaster County side of the river, the new artery now becomes officially designated as U.S. 30,” according to John D. Raborn, York County superintendent for PennDOT.

What happens to old U.S. 30? According to Raborn, the hard-traveled highway now becomes Pennsylvania Traffic Route 462 but retains its nationwide identity as the Lincoln Highway. . . . “Although the road [U.S. 30] is open, Raborn said some work is still in progress on the roadway, especially around the Mount Zion interchange.”

Not only does Stephen help us understand the precise date the Route 30 bypass opens, he also informs us how Route 30 became Route 30 and Route 462, Route 462.