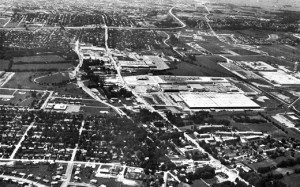 This J. David Allen photograph appearing in a 1970 Gazette and Daily calendar looks west to the point where Market Street (Old Lincoln Highway, Route 462), intersects with Interstate 83. That’s the new Route 30 running past the Caterpillar plant, top right, to an intersection with Interstate 83 at the extreme top of the photograph, creating a major interchange. McCrory’s distribution center, the York Mall and the York County Shopping Center are in the center of the photograph. (Click on image to enlarge; more aerial links below.) Also of interest: Landmark Modernaire Motel built in Lincoln Highway’s heyday.

The calendar above reverses the bird’s flight looking east to west down on that locale.

The calendar assessed this view: “The peaceful York valley of 175 years ago, when the York Gazette was founded, has grown by 1970 to this airscape of highways, multi-million (dollar) business enterprises and housing developments.”

Airscape? I heard of landscape and even streetscape.

Well, smack in the center of this airscape is the old Valley Canvas building, built as a hangar for Valley Air Park that operated there in the mid-20th century. For a better view, see Building No. 11 in Springettsbury Township. What was it then and what is it now?.

Interesting that an airport was the early developer of this land. Thirty years later in 1970, its lone remaining building is dwarfed by development. Forty years later, the scene is the same, even more so.