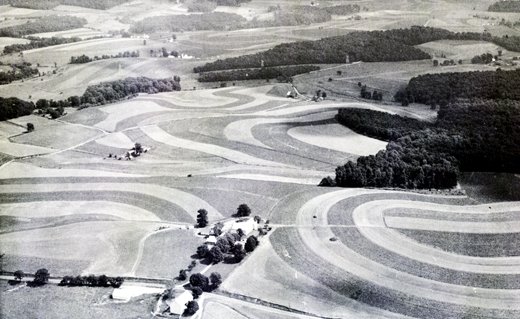 For years, The Gazette and Daily produced annual calendars with interesting photographs from around York County, Pa. This aerial scene from the calendar’s November 1970 entry shows a photograph overlooking the J.C. Johnson farm in Hopewell Township, east of Stewartstown in southeastern  York County. At that time, the land was a third-generation farm. In these years, the movement of Marylanders to southern York County was beginning to pick up speed. Interstate 83, opening in 1959, spurred the so-called Maryland Migration. Still the calendar caption writer was able to say, “Beautiful York County has been made more beautiful by the foresight of the soil conservation pioneers of the Roosevelt era and the farmers who carry out their precepts.” Also, this would be the last calendar that The Gazette and Daily produced. That year, newspaper became known a the York Daily Record. (See links to additional aerial views of York County below.) Also of interest: York County artists use brushes to preserve landscapes.

“Down on his luck, David E. Pergrin left the Penn State football team with a broken collarbone, then left the university when he couldn’t pay his bills.

“This was the end of the Great Depression. Pergrin went back home to Clairton, Pa., outside of Pittsburgh, to work in a steel mill to earn the money to finish college. It was but a speed bump, nothing more.

“After he helped give the university its Nittany Lion shrine as a class gift, he went off to war and became the leader of one of the most heroic, high-recognized battalions in Europe.

“Later, he became vice president and chief engineer of the Penn Central Railroad, he started a consulting business and also was an expert wood carver.

“The last six years of his life were spent with his wife in Shrewsbury, near their son. Before that, he spent two decades near Philadelphia.

“Pergrin, who had been a colonel in the Army, died Saturday. He was 94.”

A story like this always me of the accomplished people – even famous people – who live all around York County. Anyone like this that the newspaper hasn’t found yet?

Titanic number of stories: The 100th anniversary of the Titanic sinking has resulted in numerous stories in the newspaper and on ydr.com. Check out, for example, this piece on Christian School of York students fashioning a replica of the Titanic’s gigantic anchor. And remember York’s connection to the Titanic: York County holds three links to the ill-fated Titanic.

Disappearing signs: A Lancaster County author has written a book about those cast iron town signs around Pennsylvania. And he discusses those that are disappearing: A Guide of Pennsylvania Towns.

Remember when? York Little Theatre was in the old York County Academy building for years. Yorkblogger June Lloyd reminds us about those days and includes a neat drawing of the old academy.