Hope the reviewing stand beside this York, Pa. church was well built: Linked in to history, 4/2/13 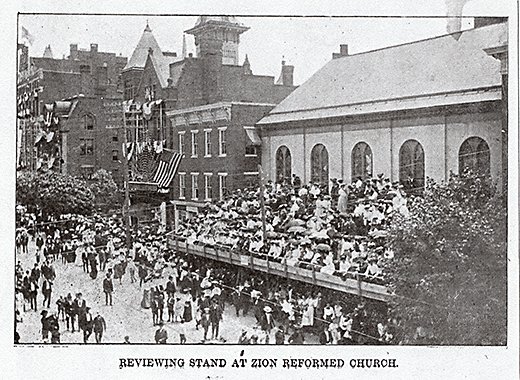 This scene might have been part of 150th anniversary of York County, Pa., festivities in 1899. The stand is on West Market Street. The church was located where the old Woolworth’s store is located today. Those sitting on the stand were treated to several parades in that milestone anniversary. I had never seen this photograph before Phyllis Eisensmith called this to my attention this week. She and her late husband, Richard, were active members of one of the successors to Zion Reformed Church for years – Zion United Church of Christ on Penn Park – and Phyllis still is a mainstay there. The other church drawing its heritage from this church is Trinity United United Church of Christ, whose steeple is barely visible one or two buildings west of the reviewing stand. Notice the street level seats under the stand. Hope it was built well. It must have been because history does not remember any such tragedies. Also of interest: York County, Pa.’s 150th birthday party would have astonished founding settlers.

A previous York Town Square post probed its whereabouts, and Stephen, using one-room school information, found it on Martin Road in the vicinity of Stoverstown.

He commented on that post: “Two unidentified schools, on maps earlier than 1900, fall within a half-mile of Cherry Grove School. One school is pinpointed on Martin Road; I visited this site Monday, the house matches the picture at the beginning of your post.”

He then post his work, complete with maps and photos with typical Stephen Smith thoroughness on his YorksPast blog.

She pointed out that Latrobe was a genius in architecture and engineering, and his work include mapping the lower Susquehanna. She posted more about Latrobe on her Universal York blog. 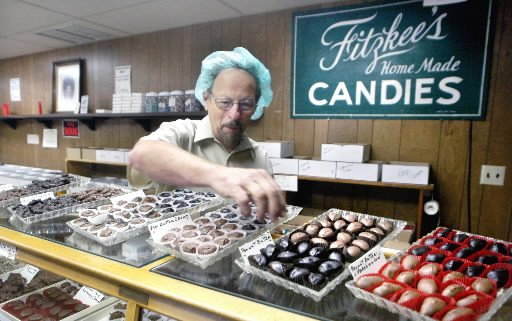 Fitzkee’s Candies in York Township, in this YDR file photo from 2005, buys sugar by the ton. So sugar policy reform, under way in Congress, helps local candymakers like Fitzkee’s and Wolfgang’s. Check out: Local confectioners: Sugar policy reform would benefit consumer, business.