Doctor wrote about oxygen use to aid ‘average country practitioners’ 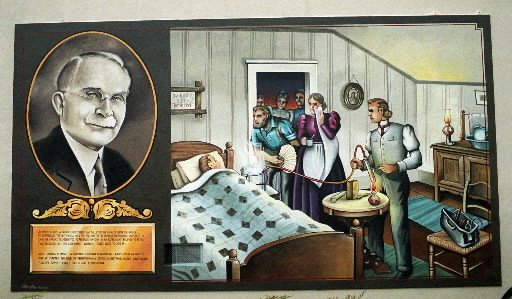 George Holtzapple, longtime physician at York Hospital, has been credited in local lore as the very first user of oxygen for treatment of pneumonia in 1885.
As a young physician, just out of medical school, Holtzapple (1862-1946) used a primitive experiment to produce oxygen to save the life of 16-year-old Frederick Gable.
Well, two York Hospital researchers, writing in the Journal of Medical Biography in November 2005, have clarified Holtzapple’s achievement… .

Here’s a summary from the journal:

“The paper suggests that Dr. Holtzapple was not the first to use oxygen for pneumonia patients but was the first to publish a case report with a reasoned physiological explanation of oxygen therapy. His publication was intended, in his own words, to benefit ‘average country practitioners’ who had no other means of learning about his valuable therapy.”

Simply put, the paper notes that Holtzapple was aware others had used oxygen for pneumonia treatment before him but wanted to get out into medical literature the treatment so other physicians could use it.
Thanks to Dr. Peter M. Hartmann, vice-president for medical affairs at York Hospital, and Suzanne M. Schultz, director of library services, for their research, which reviewed relevant medical literature to 1899.
After reading their work, I breathed a bit easier. I’ve tried to hedge in my writing about Holtzapple being the first using to use oxygen by using such words as “a pioneer” and an “early user.” (A few years ago, I had run across Holtzapple’s original journal article.)
Writers often are enamored with someone or something being “the first.” (I know I’ve fallen into that trap.)
For example, a historical marker near the York Expo Center says the York Fair was the first American fair. That would be tough to prove, and as far as I know, no one has ever followed the trail back. It would be accurate to say that the fair was an early American Fair. (For background, see the post: The lower she sank in her chair.