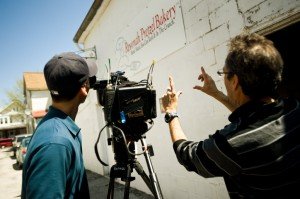 Hollywood met Hanover the other day, according to a Hanover (Pa.) Evening Sun story about Revonah Pretzel Bakery. A film crew was in gaining footing for a new TV series The American Baking Competition. They spent time at Revonah, one of Hanover’s noted snack food makers, and they got a good feel for the bakery. ‘The film crew that captured the action on Thursday, seemed mightily impressed with Revonah’s throwback feel, from its pitted concrete floors to its worn wooden baking trays. It’s a business where the oven and stacked flour sacks – all the stages of the pretzel-making process and, on Thursday, a film crew – are seen from the front counter of the factory store,’ the story said. Oh yes, the origin of Revonah? Think about it. If you still don’t know, check the answer below. Also of interest: Hanover – York County’s oldest borough.

Charles T. Mahan Jr., a well-known railroad historian, has died. A Baltimore Sun story says he had been documenting the Maryland and Pennsylvania Railroad – the Ma & Pa – since the late 1930s.

The Ma & Pa Railroad was Mr. Mahan’s passion,” the Sun’s story stated. “The 77.2-mile single-track railroad wandered across the bucolic countryside and hills of Maryland at 20 mph on its way to York, while crossing 114 bridges and traversing 476 curves. The Ma & Pa ended passenger service in 1954, and freight service was terminated four years later.

“Mr. Mahan photographed and collected anything to do with it.”

YCP is growing: York College of Pennsylvania went on lockdown overnight because of the possibility a robbery suspect was on the premises. That’s a big area to lock down. Check out the size of York College’s campus nowaday.

East on E: Sarah Chain over at Yorkblog’s Book Buzz tells about the York Daily Record/Sunday News publishing my “East of Gettysburg” on e-book. Check out Sarah’s post for details.

Little ditch, big history: Cannonball’s Scott Mingus posted a photograph of the ditch, or stream, that Jeb Stuart, astride his gallant horse, jumped across to escape capture in the Battle of Hanover. It’s not the 15-foot or so ditch that Stuart claimed today, but it sure is interesting to know what happened there. 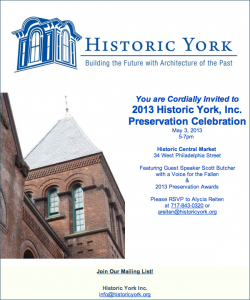 Architectural historian Scott Butcher will be speaking on the potential provocative topic “Voice for the Fallen,” at Historic York, Inc.’s Annual Preservation Celebration. By fallen, that means architecturally and historically significant buildings that have been pulled down recently. More on Historic York Inc.’s FB page.

Answer to question above: Revonah is Hanover spelled backward.