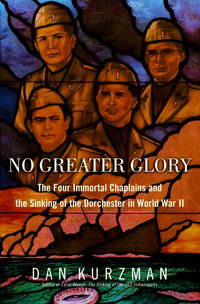 Dan Kurzman wrote a historical fiction book on the Four Chaplains, which included Rabbi Alexander Goode of York, Pa., lower left. Now, a movie on their heroics is in the pipeline. Meanwhile in York, the 16th Annual Four Chaplains Prayer Breakfast is set for 7 a.m., May 14. At that breakfast, community volunteer Dr. Luther B. Sowers will be presented with the Chapel of the Four Chaplains Legion of Honor membership. For information, call 854-9504. Background posts: York’s contribution to ‘The Four Chaplains’ still gains attention, Often forgotten: Achievements of people named on building facades and York County historical war deaths top 1,000.

Rabbi Alexander D. Goode and the other three chaplains who went down with their ship in World War II has been memorialized in stained glass windows, books, newspaper articles and on the side of a York, Pa., school.
Now, www.variety.com is reporting that Hollywood is considering turning a screenplay on the chaplains, who went down with the Dorchester in the North Atlantic in 1943, into a feature film, “Lifeboat 13.” …

Michel Shane and Anthony Romano (“I Robot,” “Catch Me if You Can”) are developing “Lifeboat 13,” based on the WWII story of the four chaplains who gave their lives during the 1943 sinking of the Dorchester after it was torpedoed by a U-boat.
Shane and Romano have acquired the screenplay by Michael Justiz and Steven Sikes, based on a story by Justiz, Sikes and David Fox. The script’s inspired by the story of a rabbi, a Catholic priest and two Protestant ministers, as well as an African-American Coast Guardsman, who gave up their life jackets as the Dorchester sunk off the Greenland coast in 36-degree waters.