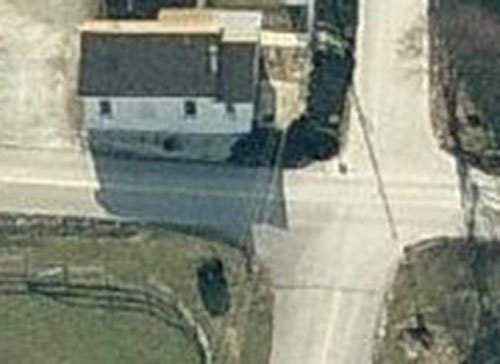 Yorkblogger Stephen H. Smith provided this Bing.com bird’s-eye image of the old Shultz schoolhouse, now a residence on the southeast corner of the intersection of Knights View and Trinity Church roads in Lower Windsor Township. (We’re looking southward here). He provided this research after a reader asked about the school. Also of interest: Fissel’s School: How students learned a lot in one room.

When we receive queries on old one-room schools, we love to look into them.

About 300 of these boxy structures operated in York County before World War II, and these public schools made a big impact on the hearts and minds of many York countians alive today.

We received such a 2012 request about Shultz School somewhere in York County and could not locate it.

Now comes another request about Shultz School from a reader, who also provided some rich family information. Then with the help from Stephen H. Smith, we appear to have found the school (assuming there was only one Shultz school).

First, the request, from Steve Shultz, who referred to the 2012 post:

“While doing research on my family tree, I came across one of your postings from August 7, 2012.

“In this post, you mention an emailer who was looking for the location of the Shultz School.

“I also have been looking for Shultz School, because I believe that my 4th great grandfather may have been involved with that school.

“I found a reference to Shultz School on page 12 of this PDF document.

“Shultz School appears as #65 on this Historic Property List.

“My 3rd great grandfather, David Shultz, had farm property just west and south across the road from the school’s location (Trinity Church Rd at Knightsview Rd.) as indicated on the map shown on page 6 of the PDF.

“I am hoping that this proximity indicates a link between the school and my relatives. However, I find that there are many other Shultzes in the area who don’t seem to be directly related to us.

“The author states that: The grandfather of Mr. Shultz was a school teacher.”

“Here, Prowell’s ‘Mr. Shultz,’ refers to David Shultz’s son, George Washington Shultz. So, my 4th great grandfather would be the ‘grandfather’ he refers to.

“I have been unable to find the first name or any other info on my 4th g-grandfather.

Steve Shultz asked if anyone had information on the Shultz School since the 2012 went up.

No one has, but I asked Stephen if he knew.

“The Shultz One-Room School is at the intersection of Knights View & Trinity Church Roads in Lower Windsor Township.  The building is still there, although ‘hidden’ under stucco.  It has a small expansion onto the schoolhouse and has been a private residence for many years.  Shultz’s was a schoolhouse by 1886 (per Gibson’s ‘History of York County’) and last operated as a schoolhouse sometime between 1924 and 1937.”

So this history mystery appears to be resolved.

We appreciate our readers raising questions and providing information, as Steve Shultz did.

And we appreciate the other Steve, Stephen H. Smith, providing the solution.