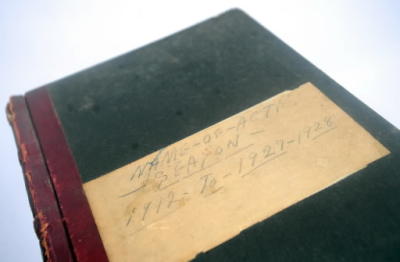 Flipside’s Erin McCracken has solved the question of the venue for acts in an old book, above, owned by longtime York County, Pa., moviehouse projectionist Lance Wolf. Lance’s book lists acts at a York venue in a 15-year period early in the 20th century. Erin went to microfilm and found the venue: The old York Opera House on South Beaver Street. Here’s one newspaper description of a show from 1914: ‘ “In Old Tyrol”, another one of those clever girl acts that have become so popular with the patrons of vaudeville, is found on the bill for the first half of the week at the Opera House. With its beautiful settings and presented by a mighty well balanced company, including two good comedians, the piece promises to be a big favorite before the middle of the week arrives.’ That’s the short story. For more, check out Erin’s column: Popeye solving history mystery. Also of interest: Lance Wolf started as a projectionist for the Dallas Theatre, which closed not long ago.

When did the York Opera House open?

The venue had its gala opening in 1881. Here’s an entry from my “Never to be Forgotten”:

“John Sleeper Clarke, brother-in-law of Edwin Booth, stars in the opening act of the York Opera House. Booth stars in “Toodles” and “The Widow Hunt.” “The large and fashionable audience present was delighted with the performance,” a newspaper reported. Before its opening, friends and opponents spar over the appropriateness of entertainment the opera house would bring to the community. Opponents also fight the decision to hold a York High School commencement in the new theater. As the years passed, opposition cooled. The annual meeting of county teachers and evangelistic meetings of Dwight Moody and Ira Sankey used the facility.”

PBS has sent out a release about an upcoming series to note.

“The African Americans: Many Rivers To Cross” is a six-part, six-hour series that chronicles the full sweep of African American history, from the origins of slavery on the African continent through five centuries of remarkable historic events right up to today… ,’ the release states.

Letter to home: It’s great to hear from Yorkers living elsewhere. This, from Bill Jacobs:

“I was born and raised in Manchester, and I have never lost my appetite for news from York County. As a resident in the Philadelphia area for nearly 60 years, I daily open your column and find so many interesting memories of my years in York County. It is an amazing wealth of news that you and your readers gather over so many hundreds of topics… . I also love all the memorable photos of landmarks.”

York celeb in news: We continue to follow York celebs making news around the world. Here’s Ken Ludwig, known for his plays, who has released the enticing book: How to Teach Your Children Shakespeare.

You’ve heard about Halestorm, Grammy Award-winning band with Red Lion ties. If you haven’t seen them, here’s an opportunity, courtesy of this Flipsidepa.com post. What do you think?