History mystery photo: This angry-looking lion’s head is sure to fend off vandals 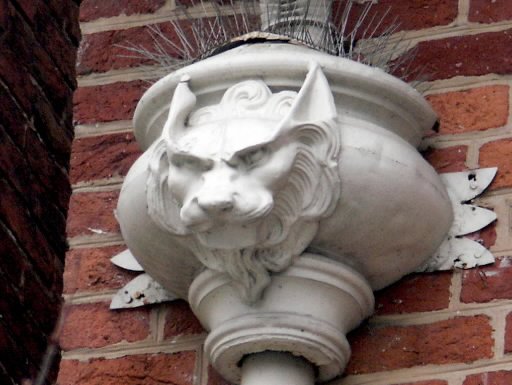 This angry-looking lion’s head marks the rain spouting at a prominent York City building, one of dozens of architectural touches seen around the city and York County towns. Anyone contemplating mischief on this property will have to deal with Leo here. Can you locate this history mystery site? (See answer below.) By way of hints, it might be affixed to a known stop on the Underground Railroad. Also of interest: Facelift saves the Noss House from its spot atop York’s most-endangered list.

All over Dover – Pattie Crider has started a Facebook page on the winsome topic, You know you’re from Dover if …

Sovereign dethroned: Sovereign Bank Stadium is receiving the name Santander, after the Spain-based bank that owns the former Pennsylvania financial group. Which led the YDR’s Lauren Boyer to ask about how you say the bank’s name.

Buffy’s World: Buffy Andrews, well known around York for her social media prowess, has gained a second book contract. This is the second book contract in just a few weeks for Buffy, a longtime writer of children’s fiction. This one is with Carina UK. The earlier was a deal with Limitless.

Inside edition: For those who like such thing, check out my York Sunday News column on how the YDR and three other newsrooms covered Gettysburg 150. By the way, our Gettysburg 150 webpage will remain up with continuously updated Civil War stories and photos.

York Fair time is fast approaching, as the assembly of this roller coaster attests

Answer from above: The lion’s head appears on the William C. Goodridge House at 123 East Philadelphia Street. That touch no doubt came from a subsequent owner – noted architect Reinhardt Dempwolf.