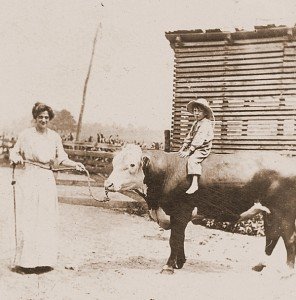 How can one photograph go across the world? Dianne Bowders posted this old photo, titled ‘Riding the Bull,’ on ydr.com’s Your Photos reader-submitted photo area. Hundreds of people saw it there.The YDR’s Buffy Andrews pinned this wonderful photo to a historic photo board on the burgeoning social media site Pinterest, founded by York Suburban grad Evan Sharp.  So thousands will view it, along with others historical photos of York County. It’s the power of social media. Bowders wrote that the photo shows Mabel Z. Rishel (1890-1989) leading the Emigsville-area farm’s Hereford bull while nephew Ray Meyers enjoys the ride. The photograph is about 100 years old. Buffy Andrews has put up multiple photos on Pinterest board with these topics:  Made in York County; York County Parks; York County Museums; Extra! Extra! Read all about it (Newspapers on Pinterest); York Daily Record Historic front pages. (Click for a larger view. See another York County image on Pinterest below.) Also of interest: See many other Dianne Bowders‘ photographs of York County people and scenes.

Our post about New Salem borough, or York New Salem as it is commonly called, has drawn several posts from YDR’s Facebook readers:

Tricia Busler Harrison: “born and raised, my parents still reside there. In the early part of my youth, New Salem didn’t even have a traffic light. I have many, many fond memories of walking around town, stopping at the Mobil Gas Station (Noss’s) for a drink and candy, playing basketball on the “court” at St. Jacobs Lutheran. It was just a small town where everyone knew everyone.”

Janelle Dotzel: “I was born and raised there as well. Lived there for the first 21 years of my life. I worked at The Sherwood Inn until I graduated high school. When we were kids, we always rode our bikes to the post office to get the mail then stopped at Jim & Nena’s for some pizza. Way back in the day they used to have snow balls over the summer. Then we’d go over to Noss’s, Exxon, and buy some bubble gum and a soda. He was the nicest man! I have a lot of great childhood memories there! Wish we could turn back time.”

Derek Ilgenfritz: “I also grew up there… Worked at Stups dairy farm then Twin Pine Farms… Ahh the old days.”

To view the many comments about New Salem, whether it’s the borough (New Salem) or the post office (York New Salem), go to the YDR’s Facebook page.

The bodyguard: Don’t think York County is in the center of the universe? Did you catch that Whitney Houston’s real life bodyguard lives in Springettsbury Township?

Camp Security in news – The land on which all or part of Camp Security, the former Revolutionary War prisoner-of-war camp in Springettsbury Township, stood may come into public hands. York Rotary received an update this week.

Civil War scenes: A reader flagged an neat digital feature from The Atlantic: the Civil War in photos.

Blog post of the day: Cannonball’s Scott Mingus blogs about two anniversaries Hanover is planning for in 2013 – the 250th since its founding and the 150th since the Battle of Hanover. 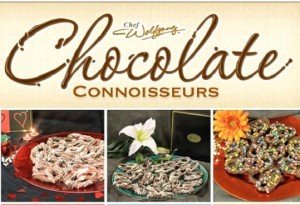 North York’s Wolfgang Candy Company is pinned as part of Buffy Andrew’s Made in York County Pinterest board.