York County has produced its share of high-ranking naval officers 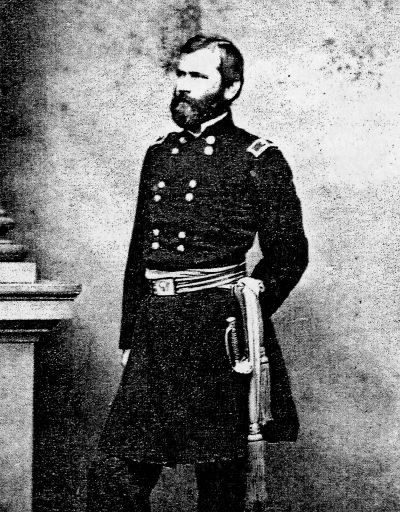 Franklin is often lost in the shadow of his older brother, Civil War general William Buell Franklin, who commanded a grand division at the Battle of Fredericksburg.
Samuel Franklin, who saw action in both the Mexican and Civil Wars, is actually remembered by history. He was buried in Arlington Cemetery and the cemetery’s Web site gives him a brief bio.
Google Books has scanned in his 398-page memoirs.
But Mark Snell’s “From First to Last”, a biography of William Franklin, gives a brief but lasting memory of Samuel Franklin:
Franklin was in command of a corps in the Peninsula campaign, and Union men had just fallen back from Richmond, the city’s church spires in sight.
They camped at Harrison Landing in a position made strong, in part, because U.S. Navy armored gunboats patrolled the James River, just off shore. The USS Aroostook was one such gunboat. Sam Franklin was in command of that boat.
“His gunboat protects our front,” William Franklin wrote.
William sent their brother, Walter, who was under his command, to bring Samuel ashore for a reunion.
June Lloyd’s column 12/16/07 follows:

We recently read the news that a native Yorker, U.S. Navy Captain Chip Miller, has been designated captain of the new aircraft carrier named for former president Bush. Several York countians in the past have also attained high levels of responsibility and rank in the Navy. A Civil War-era example is Rear Admiral Samuel Rhoads Franklin, brother of Army General William Buel Franklin.
During the late 19th and early 20th centuries, the illustrious naval career of another York native, Rear Admiral Richard Morgan Watt Sr. unfolded.
Born in York in 1872, Watt was the son of Andrew Watt, a native of Scotland who settled in York County, and his wife Susan A. Bahn of Columbia, Pa. Andrew and his brother Richard formed Watt & Brother, painters and decorators of churches and homes as well as retailers of wallpaper, paints and varnishes.
Even though the Watt & Brother establishment flourished for many years, Andrew’s son, Richard Morgan Watt, went in a different direction. He reportedly won an appointment to the U.S. Naval Academy through a competitive examination when barely 15, graduating fourth in his class four years later. He then went on to two years of post-graduate study in naval architecture at the University of Glasgow, Scotland, before serving at shipbuilding facilities at Norfolk; Philadelphia; Brooklyn; Washington, D.C.; and Quincy, Mass.
Richard M. Watt Sr. figured in several worldwide news stories during his naval career. As a young officer, he was a member of the 1911 board that examined the wreckage of the USS Maine in Havana harbor to determine the cause of the disastrous explosion that had helped trigger the Spanish-American War in 1898.
A few years later, Watt was called the “star witness” in a July 1915 New York Times article about a suit the White Star Line had brought to limit liability in the sinking of the Titanic. The article reports Watt’s testimony against the steamship company: “The witness said that if the Titanic had had a watertight deck extending to the top of her bulkheads, she would be afloat today. Longitudinal bulkheads, he said, would have increased her buoyancy. The owners of the Titanic, he said, were at fault because they did not give the constructors a free hand in the installation of safety devices.”
Watt went on to supervise construction of many naval battleships. An unidentified newspaper article about his 1936 retirement lists him having had a hand in the supervision of building the battleships Indiana, Massachusetts, Iowa, New Jersey, Rhode Island and Vermont; cruisers New York, Brooklyn, Columbia, Minneapolis and Des Moines; and submarines Octopus, Viper, Cuttlefish and Tarantula. He died in 1938 and is buried at Arlington National Cemetery.
The legacy doesn’t end there. Richard Morgan Watt Sr. was married to Bessie M. Davis of York. Their son, Richard Morgan Watt Jr. was born in Brooklyn, N.Y., in 1901. After attending schools near his father’s posts in Washington, D.C., and Norfolk, he followed the path to Annapolis, reportedly graduating first in his class in 1920. After doing post-graduate work at MIT, he too served the Navy in shipbuilding design and construction. He was stationed on the aircraft carrier Lexington, based at Pearl Harbor, on Dec. 7, 1941. Luckily for the Lexington crew, the ship was at sea during the attack.
According to a short typed biography at the York County Heritage Trust Library/Archives, Richard M. Watt Jr., who also attained the rank of rear admiral, was awarded the Legion of Merit in 1943 for his work on the Navy’s destroyer escort program.
Not to be outdone, a third family member of York painter and decorator Andrew Watt achieved rear admiral status. According to a May 1951 Gazette & Daily article, local Kiwanis club members George Hay Kain Sr. and William H. Kain had their nephew and cousin, Rear Admiral Richard Morgan Watt Jr., speak to the club. Rear Admiral Andrew G. Shepard also attended the Kiwanis meeting to hear his cousin Richard speak. Shepard was son of Jessie Elisabeth Watt and George H. Shepard and grandson of Andrew.
York County may be landlocked, but it certainly has sent many of its young to sea to serve with honor and distinction.