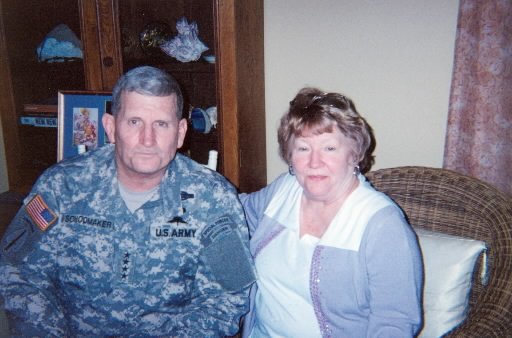 Red Lion resident Barbara Krout is seen with her cousin Gen. Peter J. Schoomaker, the 35th chief of staff of the U.S. Army. Peter and his Army surgeon general brother, Eric, have spent many days in York County. Background posts: York has produced its share of high-ranking naval officers and York/Adams residents contributed to ‘The War’.

Some links between York County and national achievers are strong. See the previous post on New York Giants’ offensive line coach Pat Flaherty, for example.
Others are a bit more tenuous. Still, when two brothers of high military rank have strong family connections to York County, it’s worth noting… . 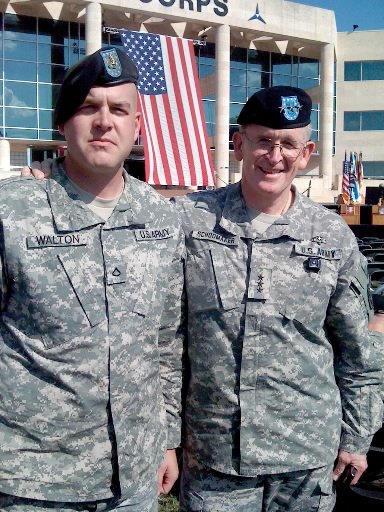 Two brothers — one who would grow up to become Chief of Staff of the U. S. Army, the other who is the Army’s current surgeon general — have family ties to York County.
Red Lion resident Barbara Krout, who is in her early 70s, is a first cousin of Gen. Peter J. Schoomaker, the 35th Chief of Staff of the U.S. Army, and Army Surgeon General, Maj. Gen. Eric Schoomaker.
Peter Schoomaker spent 31 years in a variety of assignments in conventional and special operations forces. He participated in numerous deployment operations, including Desert One in Iran, Urgent Fury in Grenada, Desert Shield/Desert Storm in Southwest Asia, and he supported many worldwide joint contingency operations.
He also served as Commander in Chief for U.S. Special Operations Command at MacDill Air Force Base, Fla., from 1997 to 2000.
Peter Schoomaker’s appointment as Chief of Staff was unusual. He was called out of retirement to take the post. He became U.S. Chief of Staff in 2003 and served until 2007, when he retired and handed over the position to Gen. George Casey.
“He retired formally and we went to the ceremony,” Krout said of the 2007 event that she and her husband, Gary, attended in Fort Meyer, Va. “It was really something.”
Peter Schoomaker is a great story teller, Krout said.
“He’s a tremendous historian. I love to listen to him,” she said.
His brother, Maj. Gen. Eric B. Schoomaker, is the 42nd Surgeon General of the U.S. Army.
“The thing about these guys is they’re not West Point grads,” Krout said of her first cousins. “They’re ROTC. That’s what I think is so cool.”
Krout said her father, who is deceased, and the Schoomakers’ dad were brothers.
“(Some) summers they would come over to our house. . . . They came between stations, between assignments,” Krout said of the Schoomaker brothers and their family, who lived in various places because their father was in the U.S. Army, she said.
“We lived on a farm,” Krout said of her childhood home in Chanceford Township. Her parents, M.J. “Jim” Schoomaker and his wife, Iva Workinger, lived there from the late 1930s to the early 1970s, Krout said.
Krout also has two sisters who live out of state and were raised on the farm the Schoomaker boys visited.
“When they visited . . . we did Gettysburg Battlefield over and over again,” she said.
Krout said the Schoomaker brothers have always been smart and dedicated to learning.
“They were very bright,” Krout said. Their father, Krout’s uncle, is a retired U.S. Army colonel and their mother was a biology teacher.
Krout, a retired registered nurse who worked for Eastern York School District for 30 years, said she wished her father had lived long enough to see the Schoomaker brothers achieve their high military ranks.
“I’m very proud of them,” Krout said of Peter and Eric Schoomaker. “My father would be so pleased.”