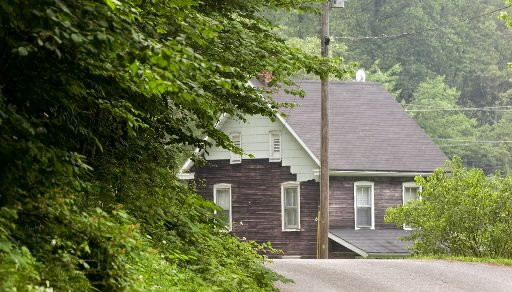 This is my favorite photograph of the Hex Murder house, scene of the killing of a suspected witch in 1928. A trio murdered Nelson Rehmeyer, acting with the belief that he had cast a spell on one of them. This York Daily Record/Sunday News photo makes the house appear to be rising from the Rehmeyer Hollow field in southern York County, Pa. All Hex Murder posts from the start.

The Hex Murder case and trials of 1928-29 have become associated with Halloween.

The North Hopewell-Winterstown Fire Company helped make it so by offering hayrides for years into Rehmeyer’s Hollow. This year, the fire company revived the event, offering tours of the house itself. (Those tours are over for this year.)

That’s interesting, given the fact that the murder happened at Thanksgiving, 1928. The trio of John Blymyer, John Curry and Wilbert Hess set out to Rehmeyer Hollow on the evening of Nov. 27, according to ‘Trials of Hex’ author Ross McGinnis. Thanksgiving that year was Nov. 29. In fact, that was the day Rehmeyer’s body was discovered by neighbor David Yanover. “There he was on that Thanksgiving day of 1928, lying on the floor, face down, his head resting on a block of kindling wood, a piece of rope around his neck … ,” McGinnis wrote.

So as York County was observing the holiday and prepping for Christmas shopping and other holiday festivities, the trio of young men plotted and carried out their plan to gain some items from Nelson Rehmeyer that would break a spell. That plan went awry and the subsequent trial gained international headlines.

Halloween is an expected link because the moment involved witches and spells, a dark and remote area, murder, a partially burned body.

The victim’s and assailants’ families suffered.

It was a terrible, terrifying moment in York County history.