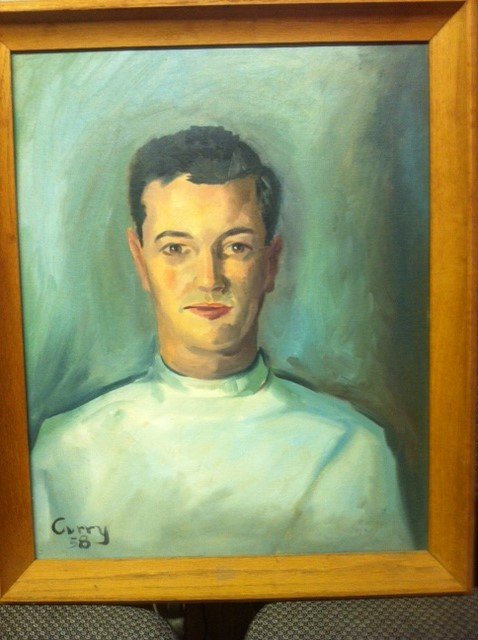 John Curry, who painted this portrait, was one of the York County, Pa., trio who killed suspected witch Nelson Rehmeyer in what became known as the Hex Murder case of 1928. After his release from prison, Curry became an artist, whose work is in the homes of several York countians. Also of interest: What happened to Hex Murder defendants, convicted in York County 80 years ago? and All Hex Murder posts from the start.

Dallastown’s Gene Snyder is a love of history and a cutter Gary E. Heiland’s hair.

So when the conversation came up recently about Shane Free’s documentary film about the Hex Murder case and trials of 1928-29, the barber fetched a painting.

“Gene told me that he knew Curry pretty well and Gene
was very familiar with the route traveled by the three culprits on that
night long ago,” Heiland wrote in an email.

He says that some of the route/trail they followed to remote Rehmeyer’s Hollow in southern York County has changed quite a bit, Gary wrote in an email to Shane Free.

Free will interview Heiland about another defendant, Wilbert G. Hess, who married his cousin.

This illustrate an often observed point about York County history. With our still strong family structure, family members of historical figures often can be found to add to the picture.