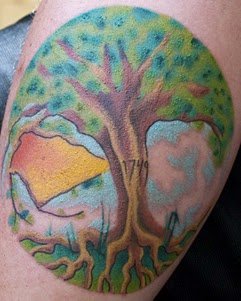 Blake Stough blogs regularly over at Preserving York on “Family. Heritage. History. Genealogy. Memories. Tradition. Life.” But he’s preserving York in another pretty unusual way. Via tatto. That’s his above. He wrote on Google Plus: “Yesterday I received my first tattoo dedicated to York County, Pennsylvania history. I’ve researched my ancestry and local history for many years, and have a deep bond with the area. I had an idea for a tattoo, and Sarah at Wandering Canvas Tattoo and Piercings worked with me on the design. This tattoo was placed on my right forearm, and I have more related to the area’s history in mind. For those not from the area, York County is shown in orange and yellow beside the tree, and the year it was founded (1749) is shown on the tree. The roots symbolize my firm connection to the area, and the tree with a full crown symbolizes how much York County has flourished from its beginning to the present day.”  Then he writes via direct message on Twitter: “I actually have my 2nd York County tattoo scheduled. Will be Zion Luth Church on Duke, circa. 1890 from a photo I have… . “Also of interest: Here’s a slightly different depiction of York County’s borders.

Richard S. Neal is from Virginia, but he recently emailed a query about a local cemetery”:  The Meisenhelder Burial Grounds.

I emailed him back that Lila Fourhman-Shaull, lfourhman-shaull@yorkheritage.org, is the expert. She has catalogued 300 cemeteries in York County. Perhaps Meisenhelder is one of them.

Review of note: Bill Peschel reviewed Scott Mingus and my “Civil War Voices From York County” in the Patriot-News in Harrisburg.

Here’s what he wrote:

Drawing from contemporary accounts, including newspapers and oral histories, “Civil War Voices from York County, Pa.” delivers a unique, ground-level history of the conflict in the midstate with an emphasis on the Gettysburg campaign.

The book is a kaleidoscope of vignettes, some only a few paragraphs long, telling the stories of soldiers, farmers, business owners, women and children, frequently in their own words. Compared to the tapestry of history, these are small stories except to those who lived them.

Some are tragic: A soldier returning home atop a railroad car is knocked off as it passes under a bridge and dies. There are also the forgotten heroic tales, such as the shoemakers who made boots for the Confederates to keep them from burning York, and the residents of Hanover who manned the barricades when the rebels appeared.

Even the great figures who move through these pages are reduced to a more human scale. When President Lincoln, stopping in Hanover on his way to Gettysburg, was asked to speak to people outside his railroad car, he told the crowd, “Well, you have seen me, and according to general experience, you have seen less than you expected to see.”

“Civil War Voices” serves to remind us that, for each big event, there are thousands of smaller stories behind it, nearly all of them forgotten or lost. “

Forum of the day: An Exchanger has posted information about an exhibit in Dover about Gov. George M. Leader, a former resident of that area.