Here are many memories of life down on a typical, but special York County farm 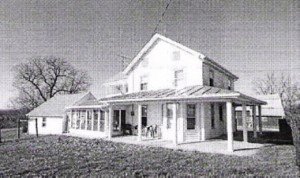 A farm in the Bupps Union area of Springfield Township has a story that history must remember. Contractor/farmer Harris Lentz built the farm. He was married to Melinda (Beck) and raised one of those big York County families there. The Lentz and Glatfelter families were pioneers in that area, as York County’s Steven A. Miller points out. ‘These two patriot and founding families built the Seven Valley, Bupps Union and Glatfelter area and were driving forces in the York area,’ he wrote. Also of interest: A leading York County name: ‘Keeping it in family is the Glatfelter way’.

Here’s a story about a farm in the Bupps Union area of Springfield Township. In many ways, it’s typical of farms settled by those of German and Swiss origin in York County.

Today, it has a new owner, and its acreage is much reduced. The prominent Glatfelter’s name is linked to this farm, so for that and several other reasons, we’ll take a look at it today.

We do that through the eyes and words of family member Steven A. Miller, millherbears@comcast.net, adapted for publication here:

“There have been several articles written about the church, school house and cemetery at Bupps Union.

“There is a farm situated down the street from the church and the property runs to the cemetery. Although the farm is only a fraction of the original acreage, it has history from some of the most dominate families of the area.

“Harris Lentz built this farm. He was a contractor and farmer. He was married to Melinda (Beck) and raised a large family on the farm. They were my Great Grandparents and rest in the Bupps Union Cemetery.

“His son, Charles Lentz purchased the farm after his father passed. Farming the land and raising his 5 girls on the farm.

“Charles married Mabel Glatfelter, daughter of William and grand daughter of Franklin Glatfelter. They rest in the Salem Lutheran Cemetery in Jacobus.

When they passed away, he wrote, well-known York County educator Clair Trout farmed the land.

The farm recently was placed on the market in this area of heavy development, and someone stepped forward to purchase it.

“My hope is that they will maintain and restore the farm and home to its former beauty and preserve the local history of the farm and area.

“My 84 yr old mother, Lois Jean (Miller, Gentzler) Lentz, a Loganville resident, was born on the farm and still has many memories of life on the farm.”

For her, this fine land is a reminder about farming, feeding the animals (particularly her beloved cats) and family gatherings.