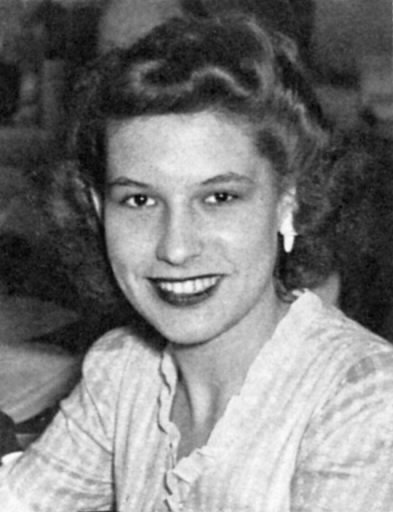 Flo Snyder Neff as a Yorkco employee/poet in World War II. Also of interest: ‘Her words helped win the war.’ and Nurses and their work appear again and again in York County’s past.

My Sunday column on Flo Snyder’s poetic contributions to Allied war effort in World War II is an example of journalism meeting history.
I came across the young woman’s writings in research on a World War II book.
Sixty years after her writing appeared in York Corporation newsletters, I interviewed her for a York Sunday News column.
The column included material from the past — history work — and information about what Flo Snyder has done up to the present day — journalistic work.
The work of a journalist and historian is a continuum.
It’s just fun to work in both worlds. Or is it one world?

Red Lion’s Flo Snyder was known throughout the world in World War II.
The 19-year-old wrote occasional poems that appeared in York Corporation’s widely distributed Shop News.
The company sent the newsletter to employees in uniform in all theaters of war — some 1,200 by war’s end.
Yorkco’s 5,000 employees working in the two local plants and in an extensive network of field offices also received the newsletter.
Shop News, replete with photographs of pretty women and bits of hometown news, was designed to be a morale builder for those in uniform.
The publication could be found everywhere.
One day, late in the war, Yorkco employees Peggy Kinneman and Roberta Klinedinst received fan mail from an island in the Pacific.
Two fighting men had run across a Shop News discarded in a jungle foxhole and were particularly impressed by the photographs of the two women, who reminded them of their “best girls‿ back home.
But Flo Snyder offered more than just a pretty face. Her poems combined glimpses of the discouragement felt on the home front and war front during the dark days of war with words of hope for the future:
“When this is over/
I want to see/
Dresses on women/
At the knee./
Instead of slacks/
And grimy hands/
High-heeled shoes/
And wedding bands.”
She concluded this poem, published in 1943, with: “Won’t it be grand/ When our boys come home.”
Words like these helped win the war.
I suspect many doughboys tearfully read these lines and went about their business with renewed vigor to fight harder so they could, indeed, come back home.
* * *
I drew heavily on Shop News’ monthly publications for a recent book on York County’s role in World War II.
I noticed that Flo Snyder’s writing stopped after 1943 and began wondering what happened to her.
In giving speeches around the county, I often close with Flo’s poem “A Vision,‿ asking folks in the audience if they knew Flo’s whereabouts. I thought it would be neat to meet someone who I learned to like through 60-year-old industrial newsletter writings.
Just this week, I heard from Flo Snyder Neff.
“Call Flo Snyder . . . ,” Viewpoints Editor Scott Fisher said in an e-mail to me. “She’s the lady who wrote the poem in the back of your book.”
She had penned the essay on this page in conjunction with Veterans Day. That’s how she and Scott connected.
I called her back.
She had heard I was looking for her and proceeded to tell about her fascinating life. The 81-year-old’s voice matched the vibrancy of her poetry.
Her writing stopped for Shop News after she turned down an opportunity to stay with Yorkco’s accounting department.
She trained in nursing and served during wartime at York Hospital when nurses were in short supply.
“We were so understaffed,” she said, “it was unbelievable.”
After the war, she married James Neff, now deceased, and later went on to get her degree at Millersville to become a school nurse and later elementary guidance counselor in Red Lion schools.
Plus, she cared for family members with dementia for 17 years.
* * *
I was full of questions.
How was it that she started writing for Shop News?
“I might have written something and they liked it,” she said.
Did she keep writing over the years?
“I like to write and should have done more.”
What are some words she lives by?
“We are the sum total of all our life’s experiences.”
For Flo Snyder Neff, that’s a high sum.
I often get little tingles when I meet someone I’ve written about.
A writer spends hours and hours in solitary research and often builds a picture of the people he comes across.
The documentary record suggested someone who was enthusiastic about people and life.
In person, Flo Snyder Neff matches that profile.
The publication of these stories today to honor Veterans Day means the poetry and writings of the young woman known by thousands during wartime is again familiar to many more thousands. The media this time are a 93,000-circulation newspaper and the Web.
Maybe today, a young GI in Iraq, sitting on a sand dune with his laptop, will read her poetry posted on this blog.
Perhaps, the soldier will become re-energized and encouraged to fight harder so he can, indeed, come back home.
Flo’s Scrapbook: “A Vision”
How long does it take to live a dream?
Renew once more a forgotten way,
To count the bands of sunlight beams,
Or wait for night to turn to day?
At dusk I climb upon a hill
Where I can almost touch a star,
To pray and hope with all my fill
And recount every blissful hour.
I press my ear unto the earth
Sure that I may hear some sound,
Of him who from his land of birth
Is fighting on some foreign ground.
I lift my head upward to pray
Then humbly lower it instead.
To Thee, dear God, I want to say
My soul hungers, it must be fed.
The things I want, they are not great,
In fact they’re very small.
To Thee my weary heart I bring
For Thee to remedy all.
I want a house in which to rest,
Some happy children, goo.
True friends that prove they are the best,
A land that’s bright and new.
I want to see the level plains,
The mountains, rivers, lakes.
The smell of Nature’s fresh clean rain,
All beauty that God makes.
I want to see the fearless men
With peace lights in their eyes,
Who build our Nation up again
Through guidance from the skies.
Then last, O God, I want to see
My love and all return,
Back to their land of liberty
Where flames of hope forever burn.

Other posts of interest linked to York County women in World War II:
– ‘Her words helped win the war.’
– Nurses and their work appear again and again in York County’s past.
– Pioneering aviator Aline Rhonie another York native who made U.S. headlines.
– York County WWII nurse: ‘You know, it was the biggest war ever, and they needed nurses’.