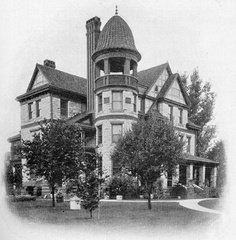 Theodore Helb’s brownstone and marble house at West Market Street and Richland Avenue in West York is long gone. Rehab work is under way to the mansion’s historic carriage house (see photograph below) owned by Pace Resources Inc. The carriage house is one of York’s grandest remaining such structures, a forerunner to detached garages on properties today. Background posts: Exploring ornate Springdale, sunken ballroom and all, Good stuff found in ‘Codorus Valley Chronicles’

The story of the Helb mansion and nearby carriage house (a post on the renovation of its dome with solid copper is forthcoming) starts in the tiny southern York County borough of Railroad.
Railroad, whose name matches its primary reason for existence, was formed in 1871.
The borough served many years before and after its incorporation as a depot for Shrewsbury on the Northern Central Railroad.
It boasted industries of its own, including a tannery, grist mill, brewery, brandy distillery and a furniture company.
Frederick Helb, the borough’s first chief burgess, was a force behind several of these interests. The Helb name was particularly connected with brewing and bottling… . 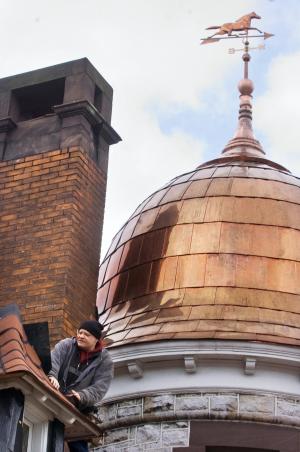 The Helb mansion is gone, but Pace Resources owns the old Helb carriage house.
In fact, Theodore, Helb’s son, operated the the county’s best-known brewery, the domed Keystone Brewery in York.
Early in the 20th century, the six-story-high brewery shipped its product across the nation.
Prohibition closed the Helb brewery. It re-opened in 1933 and closed in 1950. The massive structure at the corner of Queen and King streets was demolished in 1952. (See Striking architecture lined York’s South Duke Street for other examples of wonderful architecture that met the wrecking ball in that part of York in the second half of the 20th century.)
Theodore Helb’s brewery funded a prominent West York mansion and detached carriage house.
Back in Railroad, Helb’s death in 1905 and the decline of the railroad turns the town into a sleepy roadside community. Today, the York County Heritage Rail/Trail has sparked new service-oriented business interests.
(This post adapted from “Never to be Forgotten.” Mansion picture courtesy, York County Heritage Trust. Carriage House, courtesy, BASCO Associates.)